I recently downloaded two books for men, on relating to women and how to have a great relationship. I thought that maybe I could see what men think we need or want.

Have you done any reverse ‘research’?

(I don’t think this meme is correct, I believe we are all individuals who have many layers. 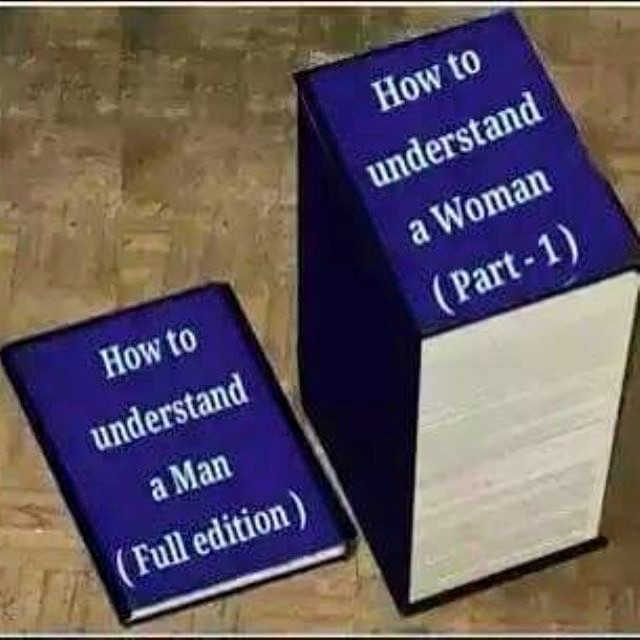 Here's one book NOT to read, it's so comically bad:

Publishers Weekly describes it better than I can:

"Presumably written straight-faced with the stated goal of helping women better understand the men in their lives, actor/model/musician Gibson (How to Get Out of Your Own Way) and former rapper Rev Run (Take Back Your Family) team up to offer alternating and in some cases opposing insights into the hows and whys of the less-fair sex. But the Socratic dialogues this is not. Gibson blurts out bewilderingly shallow excuses for cheating (to wit: 'it’s not the worst thing in the world.... It’s much worse to have to nurse your spouse through a serious sickness' ), advises women to wait a good six months before sharing emotions with a partner, cautions them to be wary of overly religious suitors—preachers in particular ('[T]hey could read "Humpty Dumpty" to you and make it sound like the greatest novel ever' )—and offers plenty more absurd advice tempered with generous helpings of ego. If that isn’t enough to deter women from mastering manology, the incessant suffixing of “MAN–”to perfectly serviceable words (e.g., 'MAN-tored ‘for, we assume, “mentored” )should do the trick. Tyrese’s tirades give Rev Run plenty of softballs to lob back as he closes each chapter with common sense and some reasonable recommendations, but it’s not enough to save this disconcerting MAN-scapade."

When my son who is normally quite intelligent was about 17, he made the most stupid statement of his life. "I don't know what the fuss is, I understand women". I told him that one day he would be embarrassed to have ever made that claim. I was right. I see little difference between men and women, a few genetic switches but that's it. I feel the same about gender and sexual preference, it is all very superficial. What I think/believe the problem is our social roles and understanding. Women and men are forced into acting certain ways and social norms results in them acting differently to get what they want, which is also different due to said norms.

Any man who claims to know what a woman wants is either lying or headed for a disappointment. The same is true for a woman claiming to know what a man wants.

That photo is one of the MAJOR problems right there.

As a man I get really sick of women portraying men as the bumbling, simplistic , emotionally incompetent part of the equation.

Its a huge part of TV's comedy culture, and really takes advantage of men's general forgiving and understanding nature.

You’re correct. On a couple of things. I rather like nimble, complex, emotionally grounded men.

The meme, I didn’t agree with it. And kinda my point about what men want.

I've been a little snarky here. Honestly I've never even considered "How to relate to a Woman."
From that I approach I don't give a crap, because it is crap.

Let's throw gender out the window and talk about humans. Be yourself and don't worry about "how to appeal" to others. Be genuine and care about others. Do not be ashamed about who and what you are. Have genuine interest in the other person. You will be a human magnet. That really sums it up.

Maybe the post shows that women are way too complicated (for some men anyway).

Humans are very complex. That makes some of their interactions with each other complex as well. Toss in pairing/mating instincts and the mix can defy all logical analysis.

I didn't know what women wanted. I had no idea what I thought. Thank goodness Cosmo magazine was there to tell me.

I read Redbook to attempt such understanding. Good recipes though.

Most women I'd say offhand and in a nutshell are looking for emotional and financial security: a man who will be there for them and provide for them, or at least share in that responsibility in this brave new world of relationships.

Luckily for me I'm an artist and I find my best matches are fellow artists who share that primary drive, above and beyond any desires for committed relationships.

I’m always the breadwinner. But I definitely need emotional support.

I’ve read some cosmopolitan articles. Sometimes they haven’t a clue.

Oh it wasn’t at the market, I actually paid for it lol @AMGT

I love cosmo. In a nutshell girls you just aren't trying hard enough to be a subservient man pleaser. Dudes you're just stupid.

I've watched a few "this is what men want" vids on YouTube, but I'm never sure how to take them. Some are incredibly sensitive while others would make you think twice about men altogether.

Can you summarize how to understand women for me?
When my son was 10, he told me he didn't understand girls. He was shocked when I said, "That's great."
"How's that good?" He asked me.
I explained to him that I don't understand them either, but it took me thirty years to figure that much out. He was way ahead.

I'm still going over the Why can't you guys read our minds, chapter.

@Akfishlady and I just finished dinner.

@irascible you forget the instinct to fall asleep after each!

You can include a link to this post in your posts and comments by including the text q:25635
Agnostic does not evaluate or guarantee the accuracy of any content. Read full disclaimer.