A cosmology question. Every single star we see at night unaided is within our own Milky Way galaxy. There is only one galaxy (I was told only if you don't count the Magellanic Clouds or the Triangulum galaxy... but the point mostly stands) capable of being seen with the naked eye, Andromeda, our closest neighboring major galaxy, which is around 2.5 million light years away (that's a whole lot of empty space). If we were in a spacecraft halfway between the Milky Way and Andromeda, what would our view be like? Would it look about the same as our own night sky, except instead of being full of stars we would be seeing galaxies all around that merely looked liked stars as their distance was so great? Would the density of these celestial bodies be about the same as we view in our own region of space, say from a vantage point somewhere in our solar system, or would it be remarkably different, whether a higher or lower density?

[Edited for correct distance to Andromeda] 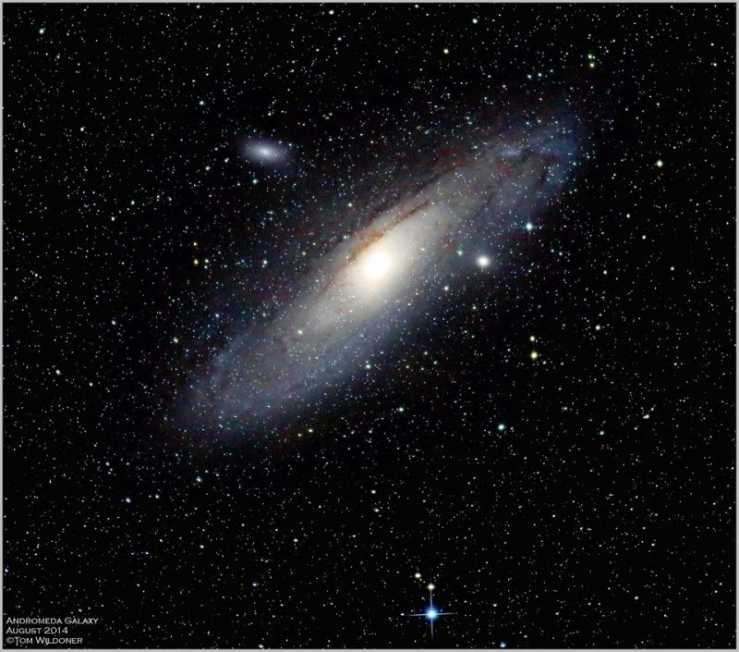 A couple of clarifications on my info in the original post.

Fucked if I know

I think it would be nearly black. There would be a scattering of star-like galaxies - more than we see from earth because there would be no light pollution save only the lights of our spaceship, or atmosphere. The eye is sensitive enough to detect a single photon and cosmic rays can also trigger the light-sensitive cells in our retina, so we would probably also experience tiny, evanescent flashes.

Well, there is also the idea that even at light speed you are speaking of maybe a third or fourth generation born and raised on a ship that are going to have an obviously very different culture and outlook.
But I think between galaxies as that might be very cold and barren. Like the darkest highway ever.

I agree, but at near-light speed, because of time dilation, you could theoretically be there in next to no time.

@NoTimeForBS Not true. The original post states Andromeda is 250 Million LYs away, meaning that even at the speed of light, it would still take you 125 million years to get there. The time dilation affect would mean everyone you knew back home would long be dead.

Hi godef. That's not quite correct. It would take at least 125 million years as viewed from earth, but from the traveller's point of view it would take less. If they went at light-speed all the way it would take them no time at all in their own frame of reference (which is the one the OP is referring to). Spacetime is non-intuitive. You can check out the twin paradox if you don't already know it.

OK, a little off as to the size of the two galaxies in the night sky, they would each be about twice the size of this, that's what Andromeda would look like if Earth wasn't stuck in a dusty arm of the Milky Way. There would still be countless other nearby galaxies and intergalactic stars visible in the pristine clarity of intergalactic space.

Even with no gas there is not a chance M31 would appear nearly that large.
Maybe five hundred million years from now as we get closer to the galactic collision.
I’d suggest getting a telescope and actually looking at this tiny dot in the sky for yourself, as I and countless others have done.

@Mortal Take it up with Phil Plait. [slate.com]

Most likely if you were in between the two galaxies you would see the galaxies as small clusters or pinpoints of light possibly resembling a star. Much like how Andromeda looks. The farthest star we can see unaided is about 16,000 light years away and the two galaxies are about 2.5 million light years away. Obviously a Galaxy is much brighter than a star, but the distance is still vast. So my guess would be a lot of darkness and a few sections of clustered light.

Turtles. All the way down. Next?

Are we there yet?

Don't make me turn this starship around!

Half way between the Milky Way and Andromeda the view would be almost all black skies, what one might think of as stars, other galaxies, would be dim indeed if visible at all. In all that darkness, Andromeda and the Milky Way would look like normal stars.
Intergalactic space is indeed lonely.

Given that you can barely see Andromeda from here, I'd think there would not be much to see beyond the local galaxy. I'd be fascinated to see what the Milky Way looked like, with the Magellenic Clouds hanging around her.

Without the atmosphere, everything would be brighter and clearer, but only Andromeda would be significantly closer. Even though there are galaxies just about anywhere you point a telescope, with the naked eye you would probably pick out Andromeda, The Milky Way and the Mageleic Clouds. I doubt you would be able to see much else.

Did you know that Andromedia used to be thought of as a much larger galaxy but now it is thought to be approximately the same size as our galaxy. The 2 galaxies will merge in about 4 billion years.

That's a good thought experiment !!!.... Good question too !!. I do believe the universe is symmetric either way we look. We should see stars everywhere we look even half way to Andromeda. Who knows. It would take us 125 million years traveling at the speed of light just to get there. So who really knows but that should not stop us from thinking about how things work !!

I corrected the distance. I swear I pulled up a link that initially said 250 million LY but it is only 2.5 million LY. Practically spitting distance lol.

Ha ha ha.... Not a biggie. It doesn't make much of a difference anyway. Our fastest current technology is basically crawling as compared to the speed of light. From practical purposes 250 or 2.5 million LY is just a mind boggling long distance.

No idea. I'd like to think we'd be able to see quite a few galaxies in the Local Group, since we wouldn't be dealing with the light pollution from nearby stars, but I don't think I'd be willing to make the trip necessary to know for sure.

Well, you would see any galaxies that you can see with the naked eye from here under good seeing conditions, plus the Milky Way of course. No more.

@Coffeo - Well, that would mean Andromeda & that's it. The others are too dim to see from here because of atmospherics & light pollution. As it is, Andromeda can only be seen on the darkest night's & clearest skies & only if you're far from civilisation.

In my thought experiment I was thinking of somehow being "magically" transported to the midpoint because who's got time for the trip otherwise?

If all the stars we can see are in the Milky Way, how can we see Andromada?

A mesmerizing curiousity! Thanks for sharing.

Interesting question! But firstly, there are two other galaxies that we can see with the naked eye - the Large and Small Magellanic Clouds, which are best seen from South of the Equator; they are smaller satellite galaxies of our Milky Way, about 70,000 LY away. And if you have good eyesight, and a very clear dark sky, and know where to look, you can also see M33, the Triangulum Galaxy, which is just slightly further away than the Andromeda Galaxy, at about 2.7 million LY. It's actually fairly close to the Andromeda Galaxy in our sky.
But back to your question: if you were halfway between the MW and the Andromeda Galaxy, you wouldn't see any individual stars at all, but you would see the Andromeda Galaxy twice as big and twice as bright as we see it now, and you would see the Milky Way as something similar, but just a bit smaller and fainter than Andromeda would look, since Andromeda is a bit bigger and brighter than the MW.
It's just possible that there might be a few stray 'interloper' stars between us and the Andromeda Galaxy, although it's unlikely that any would be close enough to you to be visible.

A link I provided below clarifies that somewhat so I need to edit my original post to qualify it suitably. One link says the "closest major galaxy" and another says the "closest major spiral galaxy." In one it shows the status of the Magellanic nebulae wasn't established till around 2003. I wasn't aware of the Triangulum galaxy also being visible to the naked eye. That's exactly why I like throwing this stuff out there, and deferring to those more knowledgeable.

Carl Sagan's pale blue dot quote is about as moving an observation as to our place in the cosmos as was ever spoken.

Idk? I've always loved looking at the stars at night.

Love astronomy. I woulkd like to learn much more about this topic. I don't know the answer to your question!

I think it would look a bit lonely and dark. No romantic moon to make you cuddle up to your loved one. Those more scientifically inclined would be busy peering into their telescopes and taking photographs of distant stars and galaxies to pore over, write papers and discuss at meetings. Vive la difference.

When we look at our sky we see lots of stars, and the Magellanic couds, which are parts of the Milky Way. If we were far enough away from Andromeda we could see it as a whole galaxy. It is also a spiral arm galaxy. This simulation shows Andromeda as well as an unnamed circular galaxy above it. The proximity to and size of the celestial bodies determines how well we see them.

You can include a link to this post in your posts and comments by including the text q:54367
Agnostic does not evaluate or guarantee the accuracy of any content. Read full disclaimer.