We rely on members to let us know when posts contain content that violiate the community guidelines. The most common reason that content gets flagged is that it contains dehumanizing or trolling/baiting text. Getting too many flagged posts will result in account termination.
1 1

An Apatheist's Response to a Gnostic Atheist - me ( "Sam" stolen)

Personally, I'm going to get off this site awhile and get back to being like Sam. I came to this site to avoid theists of all types.

Now, I'd much prefer them to the gnostic atheists and political conservatives this site's administration is demanding we coddle. No thanks, none for me.

I'll continue my search for a site which actually caters to freethinkers. A "bucket list" item if I come into another fortune will be to spend my tax deductible dollars (maybe more) seeing one is created.

What I am seeing more and more is this is not that site.

I've basically been an apatheist since cognizance.

I remember my childhood comparisons of the Santa and Geebus "personifications", from the standpoint of a youngster growing up in a poorest of the poor fundie southern baptist families in my community. "Santa" made people happy one day out of the year, "Geebus" made them miserable for the rest of it.

I was "apatheistic" to both though. I got toys on Xmas and the occasional SB goodies at pot lucks and SS (Sunday School) classes. Yet when I was coloring Jeebus, I was far more concerned with staying in the lines than any consideration if he was real or not.

Still, I would no more want an "atheist epiphany" than a theist one. I am no more concerned with the existence of dieties as the non and feel anyone so inclined to believe they know either way to be a special kind of...misguided.

One thing I've gained from this site is to use the term "paranormal" over "supernatural". Paranormal suggests manifestations and occurrences as a part of nature; supernatural suggests something superlative to nature, as if it is something apart from an all encompassing whole.

At least that makes more sense to me. What I do know is there is a "spiritual" realm and, with our current understanding and techniques of analysis, any generalized statements fall far short of actually explaining them.

For example, with my rudimentary understanding of music theory, psychology, form and analysis I can tell you what keys, key changes, tempos, harmonies, counterpoint...was used by Mozart that conjured a specific "feeling" of one of his compositions, but it is one thing to know this and utilize it.

In fact, the very attempt (at least on my part) creates a very "mechanical" piece. Yet, when that "paranormal" inspiration comes I've used many of the same techniques to create such a moving piece long before I began any serious study of music.

There is far more to it than that, but here I want to limit my discussion of the spiritual to terms even a gnostic atheist can understand.

And again, if any who have read this thus far and understood what I've said, you must understand the name of this site is agnostic.com. I just take a few steps less as an apatheist: not only do I do not know, I could care less. 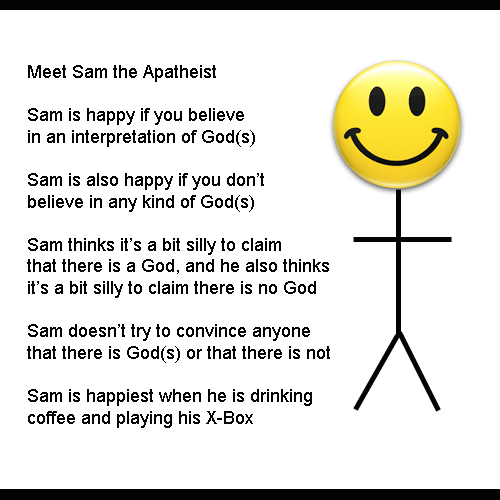 I always thought gnosticism was knowledge about God. That would make the term 'gnostic atheist' a contradiction. Now I'm told gnostic means having the knowledge to tell whether there is a god or not. That's a lot of meaning for one little word but hell, I don't know.
Another thing I don't know is where all this stuff is happening. Could I possibly not be a member of all the groups where these dramas are playing out? I guess. Please don't tell me where they are. And what about this talk of rigging the stats so that the posts of these people get some kind of prominence? And admin somehow kowtowing to them? Last question: has this something to do with sassygirl being suspended?

I'll give you two diagrams based on Dawkins model of ( a )gnosticism and ( a )theism and my apatheistic rebuttal, though I agree except in his determination agnostics are somehow "weak". We agnostics take fire from both sides for "not choosing a side", when our stance is very clear: we don't know if god(s) exist but we DO know no one can intelligently make the presumption of knowledge either way.

I won't tell you where the drama occurs but I will say if it's tagged atheism or Atheist (even capped as a tag on this site while agnostic is not) you're likely to run into it. If not, you'll probably see a lot of people congratulating themselves for knowing everything about everything.

I addressed the Admin in my Senate post but yes, the new arbitrary Trending feed which supplanted the General Forum does lean heavily toward atheists. Their posts often appear with no likes or comments so you must look elsewhere for the 'rhyme and reason'.

Sassygirl's suspension was a direct result of the site Admin's attempt to remove liberals who argued with conservatives using...colorful language. Though the conservative are generally more offensive, no administrative action has been taken against their bad behavior, at least not clearly stated as the Admin has in censoring liberals.

This particular response was to one of those ahem trending posts where our gnostic atheists were wanting to pat each other on the back...again, for knowing everything.

I'll continue to call them out on this until I'm either banned myself or just get sick of pretending this site will ever actually be a haven for agnostics.