Where Does Our Morality Come From?

Since religion was invented, it has laid claim to the idea of morality. After all, what better way is there to outgroup outsiders than to say that morality itself is reserved for the ingroup only and that being outside the group is akin to being immoral? Every religion claims to be the founder of morality, and indeed, this idea, when paired with religious dogma, claims that the morality espoused by that religion is unquestionable and perfect. In other words, morality is objective, right for all, because their god is the One True God - everyone’s god. This idea of objective, right-for-all-for-all-time morality is then used to reinforce the religion’s hold on its flock by using dogmatism to squelch dissent, because dissent against any part of the morality is dissent against God.

If dissent against a group’s morality is equal to blasphemy against its god, the inevitable conclusion is that their morality is perfect and unquestionable - objective because it comes from outside the Earth - and this gives religion control over how that morality is used and if it changes (which rarely it does, and always with resistance). Religion needs control, so religion pushes the idea of objective morality for its own sake.

So the issue of objective morality takes another turn when it comes to religion. Believers see their holy books as true, but choose which of the passages in the holy books are true first, and then decide that those passages represent objective morality. But holy books are full of contradictory or vague messages, so anyone can find passages to defend and validate their beliefs. This is why we have people using religion to protect their extremist views. Islamic Jihadists, the Westboro Baptists, the KKK, they all are sure their god agrees with them and what they are doing is good and objectively moral. After all, they found passages in their holy books, the same holy books that say “thou shalt not kill”, that support their twisted views.

The reality is, religion’s morality is not objective. It’s completely subjective, as all morality is, and then called “objective” by the religion and its adherents.

The problem is that if people are just picking what they agree with and calling it “perfectly moral”, then they are less likely to reexamine those beliefs, and more likely to fight harder for them.

Humanism is a different way of looking at morality and that gives us as a group the authority to set what we call “Practically Objective” morality, which is to say, we are choosing to call these moralities “objective” and moving on from there. That’s exactly what religion does, but we are admitting it, owning it, and building from it without dogma.

And so, what is “It”, anyway? What truth can we say is so close to “objectively true” that we call it “practically objective”, something on which we are so sure we can build a society around it?

Yes, we picked that. Yes, that means it's not literally objective. And yes, we also agree that the weighting of sentience vs perceived suffering is a judgement call in and of itself and that each person will make that choice differently! We get it, but this is our line in the sand and it’s based on science and evidence. Religions all do the same thing - they pick what is objective - but they pick based on selfish needs or dogma or something other than science, and they don’t admit it’s not really objective.

Religion Falsely Claims to Own “The Good Stuff”

What’s your favourite part of religion? Is it the outdated morality (Lev. 20:13 “If a man lay with a man as he lay with a woman, he has committed an abomination and shall be stoned to death, his blood is on his own hands” )? Original sin and threats of damnation (you are born a sinner and will be punished forever in the afterlife if you don’t have enough faith in their god)?

Or is your favourite part the “good stuff” -- the positive messages like mercy, redemption, forgiveness, charity, or simply being nice to each other?

Have you ever noticed that all that “good stuff” is common to most religions? How all religions claim to be “the religion of peace” or the “source of morality”? That’s mainly because those values, caring for each other, being good, etc, are evolved into us, independent of religions, but religions try to take the credit for giving us what we already had. Religious apologists like to claim their religions are the basis for secular morality and point to their holy books as the source. They ignore, of course, some major facts:

The following chart illustrates this point. The Humanism in the Abrahamic religions is common among all three (usually reserved for in-tribe behavior), yet each claim to be the source of the morality. On the other hand, each add their different flavour of the outgrouping, dehumanizing, war, and other abhorrent and wholly immoral behavior which they also claim is morally “good,” using the Humanistic ideals to legitimize and cloak the evil that lay beneath.

In other words, all evidence shows us that morality came first, independent of religion. Religion then retroactively took the credit and added its own dogma to protect itself and make money and power.

We all remember how we figured out many of the “good parts” of religion when we played with other kids in elementary school. Remember how you were told “be nice to others” without also being told, “because [a god] will punish you if you are not’”? That worked on your instinctual empathy, not your fear of damnation. And it worked pretty well for most of us! 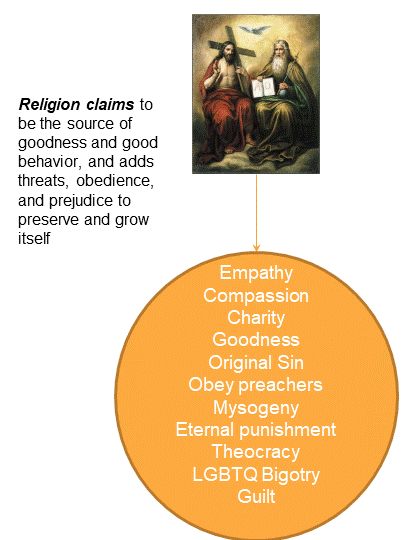 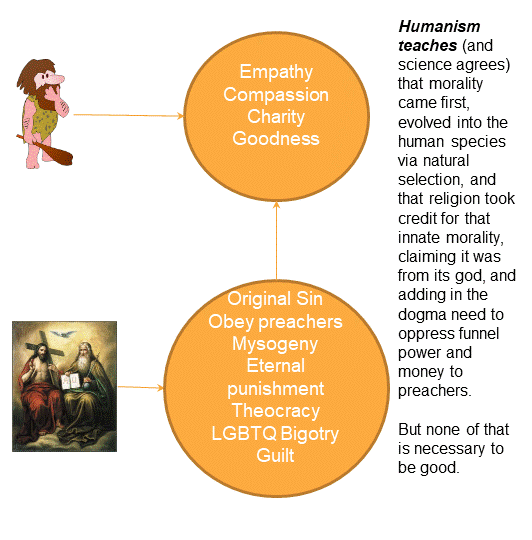 Religion thrives on the outgrouping and dehumanization that is evolved into all of us. In using this tendency, religion has held back the progress of morality as the society evolved, all while falsely claiming to be morality’s source. But morality is not about what a god or preacher believes, it what we as a society believe; and that’s where we find our Practically-objective Good.

In order to achieve that Good, we encourage the ideals that lead us to that goal, which include

While religions define morality in absolute terms, humanists see morality more practically, adjusting it to fit the situation with the goal to reduce suffering and increasing well-being. Even though it’s not really objective, its close enough to be our line in the sand. As such, we are opening ourselves up for discussion, but in the meantime, we are basing the morality of Humanism on this very firm soil.