Chances are that you are at the same time an agnostic, atheist, and a Humanist, although chances are also good that you don’t know it. It’s hard to see how these concepts work together without defining the meanings of these labels and how they individually affect our individual and collective psyches. So let’s take a moment to define our terms and see how they relate to each other.

Agnosticism is the idea that we don’t know everything, and that many things are not knowable, particularly as it pertains to gods. An agnostic person would not claim absolute knowledge, and thereby imply some room for doubt or incorrect assumptions in their positions on religion (or anything else for that matter). This usually implies humility of thought and non-extreme positions, which comes part and parcel with the assertion that they could be wrong.

Some agnostics claim that everyone is either agnostic or stubborn and they are right in a sense. Nobody knows everything and so yes it is reasonable to assert that everyone should admit that and have some humility in their positions. However, nobody can prove, with 100% certainty that anything, including the coffee cup from which they drink, is not God in disguise. We don’t know everything, so we don’t know anything for sure at all!

So then what does certain really mean? Almost certain? Does sure actually mean almost sure? Does admission of our own lack of universal knowledge imply we can never be absolutely sure about anything?

When agnostic is used in the case of religion, it is often used as an alternate word for atheism, but that is a misnomer. Agnosticism is about knowledge, not belief. The fact that we don’t know everything is independent of what we believe to be true. We don’t know everything in the universe, so we can’t say for sure that our coffee cup isn’t a cleverly disguised god, but we do believe without reservation that the cup is a cup, so we can and always do say that we believe things to be true or false, for sure, without having a full knowledge of the Universe.

So yes, we should all be aware that we don’t know everything about anything, but that doesn’t mean we can’t have solid awareness of what we know and firm positions based on that knowledge. When something happens to change our beliefs, our agnosticism and the humility that accompanies it will help to shield us from our cognitive dissonance and ideally make us more prone to adjust our ideas based on new data, but until Zeus shows himself, we can be very sure (though not 100% positive) he doesn’t exist, and your coffee cup is just a cup.

Agnosticism is the admission that we don’t know everything, and atheism is the lack of beliefs based on what we do know (what we know we know). If you have no belief in a specific god but consider yourself “on the fence” and are aware of your lack of Universal knowledge, you’re an atheist and an agnostic. Your “firmness” in your atheism is not relevant, because it’s not about how sure you are, it’s about whether you believe, actively, in a specific deity. If you don’t have a specific belief in a deity, you’re an atheist, and if you’re open to the idea that a deity may be out there somewhere, because we don’t know everything, but have no reason to believe in him right now, you’re an agnostic atheist.

Humanism is not a religion, it’s a secular (meaning “not religious”, as opposed to “anti-religious” ) philosophy, which includes a secular morality based on what we know. As such, Humanism, like Confucianism, golf, or any other secular idea, is independent from religion or religious belief. Humanism also makes no claim to knowledge, rather it works off what we know, as opposed to claiming to know or not know everything. So, much like Agnosticism and Atheism are on different scales that overlap, Humanism is on a third scale which overlaps with the first two.

This means you can be any combination of atheist, agnostic, and Humanist (vs. social extremist) and still be logically consistent. 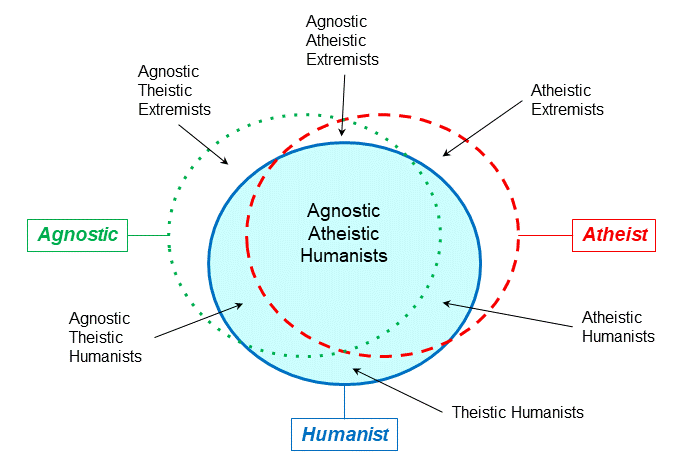 On Anti-Humanists a.k.a. Social Extremists

We can and do all break the some of the ideals of Humanism sometimes, and that doesn’t make us all “bad”, but it’s certainly not humanistic when we do that. So we need a word for those who routinely act without regard for the ideals we espouse (Practically-objective Good), whether the people are associated or aware of Humanism or not.

So what would we call someone who dehumanizes en masse, ostracizes eagerly and permanently, is apathetic to environmental or societal issues that arise from living in echo chambers, or routinely champions those who engage in this behavior (or shuns those who do not)?

We call them “Social Extremists”, because they take an extreme position which is anti-Humanistic by default and definition.

Please note that we are not talking about extremism in political opinion, but rather behavior toward other people. One can (and we think, should) be an extremist in such issues as bodily autonomy, separation of church and state, and other political issues which pertain to our morality. That’s good, productive, political extremism. This is about social extremism - how we treat other people, how we treat those who disagree, and the extreme vs. humanistic way we handle dissent and disagreement (though very often both types of extremism go hand in hand).

This isn't about bad people (we try not to dehumanize), it’s about people being so extreme that they can’t see the humanity of others or the effect that extreme behavior has on the rest of society. Humanists try to transform the social extremists into better people by showing them a better way, for themselves and society, based on the realities of today. If people act in direct defiance of what is obviously good, they are being bad. And if they are bad unapologetically and consistently, nay proudly, they are blinded by their own extremism, and need our help to become better people.

Humanists follow a morality to make the world better than today, which includes humanization, redemption, forgiveness, a true respect for cultural diversity (which leads people to different opinions, which we are all free to judge vs. the Practically-objective Good) and idealistic differences. Social Extremists do not follow that morality and indeed embrace the opposite of these ideals (dehumanization, ostracization, and echo chambers), so therefore the opposite of a Humanist is a Social Extremist.

Social Extremism is dividing, splintering, and substantially weakening democracy and our society. Ostracization, shunning, and purity tests are the norm, and all of that is at least in part due to rampant dehumanizing. This behavior and attitude also stops social extremists from caring about, listening to, or forgiving their adversaries (or even their friends) because they prefer their echo chambers of those who agree perfectly. Social extremists come in all places and all political and demographic persuasions; they are everywhere.

(Figure not to scale) 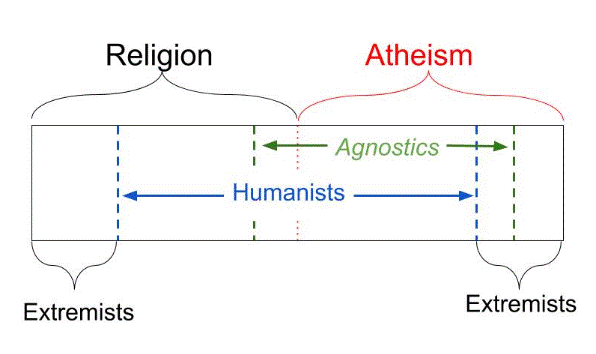 And here’s the hard part. Social extremists will treat Humanists far worse that Humanists treat them. They will shun us as we try to keep them in our lives. They will push us away, dehumanize and dismiss us. They will demonize us as the enemy even though we both have the same goals - a better Earth - because we have different experiences from them. Social extremists dehumanize en masse, and we will be shoved into a place of disrespect when we try to engage.

We engage anyway, because we’ve all been extreme at one point or another (because it’s partially innate). Extremists become Humanists all the time, and with the right communication and compassion, and a whole lot of humanizing and understanding, we can influence people who don’t think they want to be influenced, and improve who don’t think they need improvement. We can broaden minds by engaging and embracing, even as they shun and shy away.

Social Extremists are everywhere, but they can change.Through humanizing and Humanism, they can be transformed into better people, improving society and strengthening our community. That’s what makes Humanism activism.

That’s why we are here: for the extremists, and the extremist in all of us. Because extremists are complex humans who need to be understood and informed, not demonized and dismissed. The latter would be an socially extreme thing to do.

This is not a liberal or conservative only phenomenon. What is difficult for many to swallow is that, while the political far left and the far right are extremely different in many ways, the Social extremists on both sides act the same.

On a political spectrum, the left and the right are pictured linearly, with the farther you travel in either direction, the more extreme your political position. However, on what we call the Humanism Horseshoe, that continuum is bent in a horseshoe shape to note behavioral pattern similarities. In the Humanism Horseshoe, the political extremists are distributed throughout the spectrum, but the way they behave separates them into Humanists vs Social Extremists, with the extremists on both sides near each other to demonstrate that the extreme behavior is common on both sides.

Some of your reading this might be offended by the idea that you, or people like you, are behaving like the extremists when you fight for a cause you believe in. It’s true anyway. But this section is not to offend you, but to awaken you as to the possibility of how to change behavior so you can more thoroughly dominate the social extremists on the other side, using a verbal thermonuclear weapon called “civil discourse”. 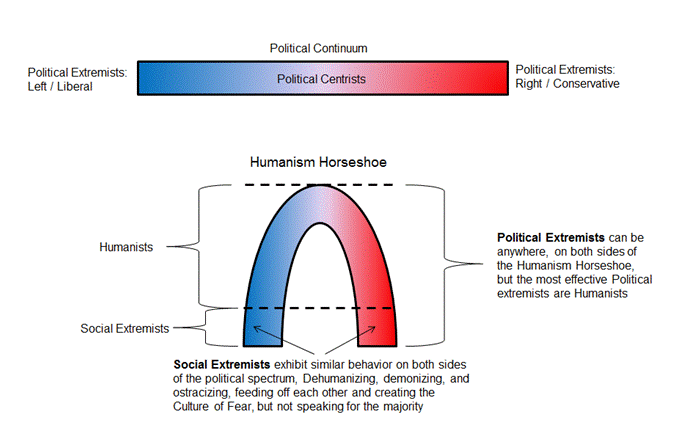 This world is so full of division and outgrouping and it is not our intent to create new ones. Rather, we seek to clarify terms and improve the understanding as to who is doing what. Agnostics, atheists, and Humanists are usually the same people, but they don’t mean the same thing, and extremists are not bad and usually deserve the benefit of the doubt, because they usually mean well. We should not demonize anyone, even those social extremists who demonize us, but rather try to understand their point of view and enlighten them to the facts of the benefits of Humanism to society and themselves.