I am a jazz bass and guitar player, and I teach guitar, piano and bass.
I worked my way through grad school reading shows on bass, rock gigs on guitar,
and studio work on both.

Then, after graduating I took a hiatus from music for a decade to focus
on computer science and systems engineering.

Then I spent 2 years playing in a country rock band in Florida,
and it was like I was an alien in red neck country.
I was a jazz bass player playing country rock, and the band members
would always tell me to play the same thing every time.
I never did.

It bored the hell out of me.

Then, I joined the most active Jazz Big Band in Florida. We were the real
deal, risers, matching arrangements for over 400 songs, a band room for weekly rehearsals.

18 pieces, 4 trumpets, 4 bones, 5 saxes, piano, bass, guitar and drums.
A Conductor (former head Mastro from the US Army) and a male and female vocalist.

We had great charts, including copies of the actual charts of the big band, as our conductor
knew them, as well as modern charts coming out of places like Berklee and
Texas.

We were all engineers, scientists, retired military musicians, retired big band players,
local working musicians rotating in and out, and rocket scientists from the Space Center.

That was musical heaven for me.

We donated all our income to local charities, split between local children's charities and local the local arts. We really made a difference.

I miss that band.

I also played shows, jazz gigs on guitar backing a jazz vocalist, and subbed for the Space Coast Pops.

These days, I live in progressive Northern California. However, there is no big jazz band to play in.

So, as a square peg in a round hole, I chose to play with the local university Symphony, where I could confront my biggest weakness, following a conductor. Also rather than have a rehearsal or two and playing a concert, we ate, slept and drank great music for a month before performing it.

I have never learned so much.

However, I must say, playing pieces like The Rite of Spring by Stravinsky, Scheherazade by Rimsky Korsokov, and currently, Mahler's 5th are the hardest challenges I've ever faced in my life.

When you play great works, it's like the composers are reaching from their graves and communicating their ideas to me.

My latest toy, I just started in Finale. I don't know how to insert dynamics, ties or repeats in yet. But, I've got a start.

Of course, I love playing bass and reading the Bass Clef. 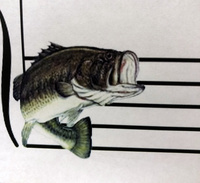 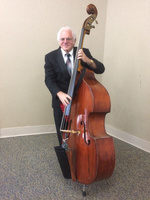 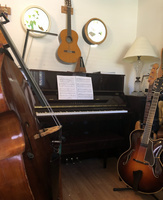 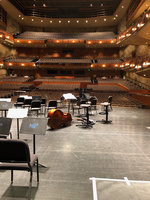 Very cool! I have been playing bass for over 40 years. I don’t have the educational background that you have. I played by ear for the first 10 years, learned some music theory and got familiar with using charts, but I was mainly a riff based rock ‘n’ roll electric bassist. I switched to upright bass about 10 years ago and fronted a blues band for a few years. Now I am learning jazz standards and it seems the best way to learn them is to listen, listen, listen, and then play, play, play as much as possible. Do you have any advice for someone learning jazz standards? 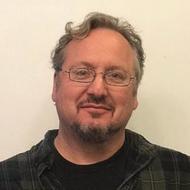 Posted by BDairI'm having trouble with my barre chords.

Posted by jasenSpace in music.....

Posted by BassManSpaceManI got a new toy with the Guitar Center card my inlaws gave me! It's an Akai Mini MkII MIDI controller.

Posted by BDairWeapons of Mass Percussion

Posted by BassManSpaceManI recorded this today on my Ipad while visiting my inlaws. It's a doomy cover of a Donovan song. Hope you enjoy it! [soundcloud.com] doommetal donovan garageband

Posted by SenorRottenWhat the music business is really like -

Posted by jasenWe probably don't have to worry about "Voodoo Chile" slight return.....