We rely on members to let us know when posts contain content that violiate the community guidelines. The most common reason that content gets flagged is that it contains dehumanizing or trolling/baiting text. Getting too many flagged posts will result in account termination.
Visit Group Join Group
0 1

10-19-07 I'm jumping a log on Banjo, my purebred TN walking horse, while on a trail ride near Soldier, KY. He was sort of a rescue..a two-year-old show horse with deformed feet from acid burns, terrified of humans that I persuaded his owner/trainer to sell to me.

It took about six months before I could get him to go on trails, and if I touched a rake to clean up a manure pile, he'd shake so hard he'd rattle.

Even after Banjo became settled down to being a good trail horse, he suddenly started throwing fits during trail rides.

When we tried to cross a tiny creek, he spun and reared, even when I led him across several times first. He kept throwing fits until I began to think him too dangerous to ride.

When I tried to load him in the horse trailer, he'd begin running like mad to avoid the trailer, even with a bucket of oats as a lure.

I'd been watching "Animal Psychic" on TV, so tried it out. I pretended Banjo could "hear" me, and asked him (in my head..I was inside the house at the time) why he kept throwing fits on trail rides.

He was shocked, and asked, "Aren't you a predator?" I explained that I was just his human caretaker and only wanted to help him. But why did he throw fits; what was wrong?

He said, "Because I'm BORED! I can't take it anymore, riding the same trails. Why not ride on that new Elk Ridge access road we tried out last week? That was fun."

I pointed out that I couldn't even load him in the trailer and he said, "Naw, I'm a traveling horse. I came to Kentucky from my breeding farm in TN. I like to ride in the trailer, if we are going somewhere interesting."

I didn't argue, because I'm the same way about being easily bored.

I promised Banjo that I would always ride on new trails, and let him tell me which ones he likes, then I told my husband about my imaginary conversation.

He just shrugged. Since I usually rode my mustang/racking horse crosses without a bridle or saddle, using my mind to guide them, it wasn't a stretch for my husband to believe me.

That weekend I told my hubby that we would ride on Elk's Ridge, per Banjo's suggestion. He began to protest, remembering the trailer trouble we had with Banjo last trip, but I reassured him that Banjo had agreed to cooperate, if I, in turn, gave him what he wanted.

So my husband backed the trailer boldly up to the fence (we'd had to hide it before), I opened the back, then went to where Banjo was crowded eagerly against the pasture gate, clipped on a lead rope, opened the gate, and Banjo quietly walked up the ramp and began pulling tufts from the hay net.

When we unloaded him and the other TN walker at the trail head, Banjo was eager to go, and from then on, he never acted up on the trail again.

I kept my promise, even when driving him on the horse cart in Daniel Boone National Forest access roads.

I always chose the newest trail, and let Banjo choose at least one of them. He'd pause at a trail head and glance hopefully back at me, and usually I let him do it.

He was so good at pulling the cart..skimming the ground in a fast run walk, or pacing, if he needed more power on a hill. Soon I could just think to him where to go, and what gait to use. Until I realized he was better at it than I was, that is, so I just let him choose the paths around the pot holes.

If I even began to think about stopping for a nature call, Banjo was already pulling over before the thought had fully formed. 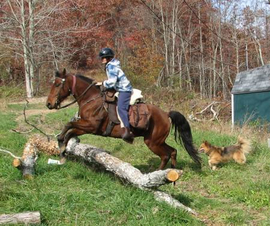 Posted by birdingnut10-19-07 I'm jumping a log on Banjo, my purebred TN walking horse, while on a trail ride near Soldier, KY.