We rely on members to let us know when posts contain content that violiate the community guidelines. The most common reason that content gets flagged is that it contains dehumanizing or trolling/baiting text. Getting too many flagged posts will result in account termination.
2 3

Hello! Newbie here. If no one has mentioned it yet, everything Anthony Jessilnik says is dark humor gold. 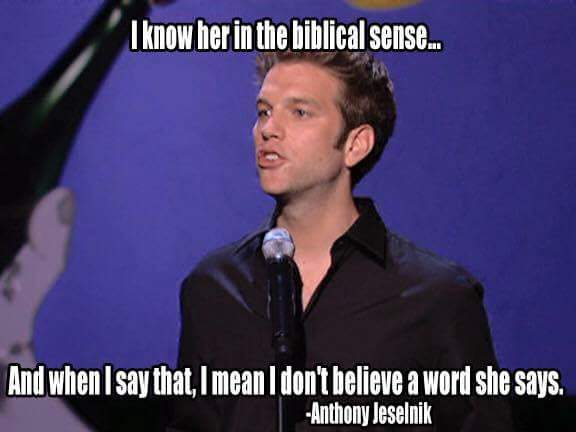 I feel like I saw that pic posted somewhere on this site a while back and an argument over how sexist it was had ensued. (Not in this group maybe but somewhere) ...but I wanted to point out, the bible is obviously the reflexive punchline of this joke, and the only reason he's saying it about a hypothetical female is he's a straight guy, and that's the only way to set up the misdirect where "biblical sense" becomes a pun for both sex and incredulity. Im no MRA, Im with feminism all the way, just wanted to put that out there. I don't believe its a joke about how women can't be trusted, it would be just as funny directed at either gender or if a gay person directed it at their own gender.

Hes got jokes that sound much more offensive toward women and lots of other demographics on the surface probably but its all a series of misdirects like a magician. I think he's an excellent tightrope walker at staying just on the edge of sounding like this could get perilously offensive but it really isnt if you break it down to thinking about "who is really the butt of this joke?" I like nerding out on comedy n dissecting the work of comedians that do that well, its masterful.

The king of one-liners