We rely on members to let us know when posts contain content that violiate the community guidelines. The most common reason that content gets flagged is that it contains dehumanizing or trolling/baiting text. Getting too many flagged posts will result in account termination.
2 5

Today while I was hiking the desert ravine below our housing division here in Albuquerque, I noticed things were almost silent..even the male curve-billed thrashers weren't singing.

Groups of Say's phoebes were shrieking, fighting, and chasing each other pell-mell through the sagebrush, and hummingbirds were coming over the wall from the housing division to attack them also when the phoebes got into their imaginary territory.

I wondered if the curve-billed thrasher babies in the tree cholla cactus halfway up the ravine had fledged yet, so I casually passed close enough to the nest to glance inside, and found myself looking into the wide eyes of an almost fully fledged chick.

The parent thrashers were both under the sagebrush busily digging up insects for the babies, but they still gave me a cheerful "WIT, WIT" greeting, as did the other thrashers as I hiked up the valley.

When I reached the house and leaned over the yard railing, I saw the female greater roadrunner coming up the mountain with a beak full of twigs for the nest.

Roadrunners like to keep building their nests even after incubation has started and/or there are chicks.

The male buzzed to his mate from the nest in the sagebrush thicket, slithered out, and zipped back down the mountain, as the female arrived with the sticks.

But soon the male roadrunner circled back and buzzed loudly a few more times close to me, before heading off down the mountain again, so maybe he was greeting me (Audio of roadrunner buzz greeting/call: Audio of buzz call

I've not seen much of him since they started incubating a new batch of eggs, and he and his mate even used to follow me on my walks, visit me at my room when they didn't see me hiking.

Pic is of female greater roadrunner this morning with a beakful of sticks for the nest. 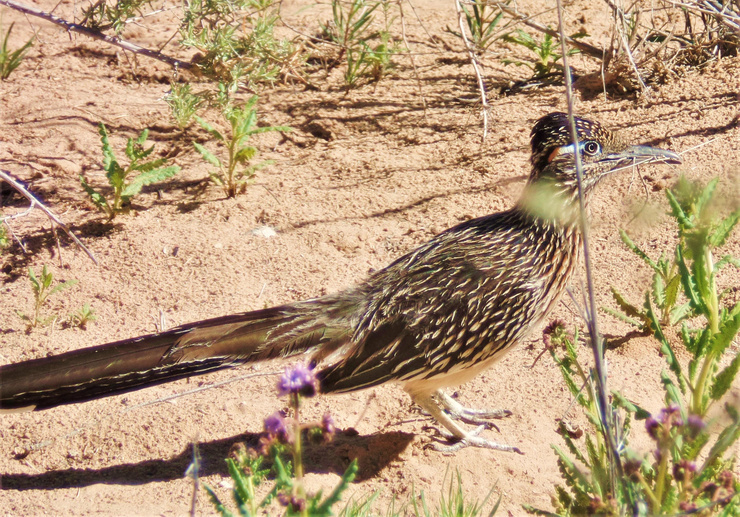 Hi Rachel. Love your account of todays hike. I too saw many roadrunners in the Henderson Bird Preserve in Nevada, where I worked a couple of years in late 90s. They are very interesting and funny bright birds. Thanks for bringing back good memories. Always love your posts. Glad to see you are still out hiking too.

Excellent detailed study. I had no idea what the Road runner sounded like until this video....thanks!