We rely on members to let us know when posts contain content that violiate the community guidelines. The most common reason that content gets flagged is that it contains dehumanizing or trolling/baiting text. Getting too many flagged posts will result in account termination.
Visit Group Join Group
7 7

The tiger trout is an artificially produced sterile hybrid that is produced from crossing a male brown trout with a female brook trout. While hybridization can occur naturally, it is rare - since the brook trout has 84 chromosomes and the brown trout 80.

Like Mules (the offspring of a male donkey and a female horse) the Tigers themselves are infertile - and cannot reproduce.

Tiger trout are very piscivorous (fish eaters) from an early age. They seem to be more willing to hunt for prey in shallower waters than many other trout subspecies are. For this reason they have been used to control rough fish and help prevent over-population of other trout species, such as Eastern brook trout.

Tigers are also supposed to be more resistant to diseases such as whirling disease, which makes them a good choice for stocking in waters that are known to be infested with whirling disease.

It is a surface feeder and is highly regarded by anglers in waters where it is stocked because of its aggressiveness to strike, its beautiful coloration, and strong fighting abilities.

Summer is for fishing! Get your line wet. AND TAKE A KID WITH YOU! ? 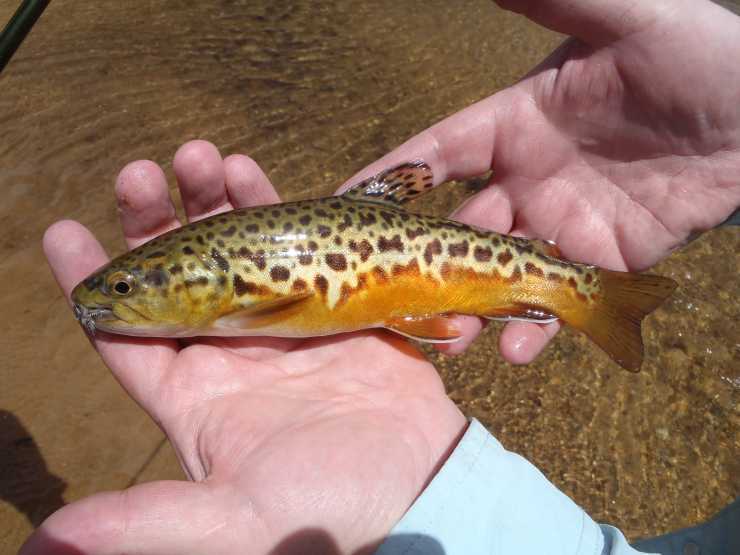 There are 2 lakes in my area that have them. Incredibly beautiful fish, a hard fighter, and all around joy to fish for. I'm going out this week for them haven't had my fly rod out this summer

Awesome! I hope you catch some. Let us know how it goes and what techniques worked for you.

They've introduced a strain of largemouths here called tiger bass here. : 2 Inches to 2 Pounds in Six Months they say. Not sterile though, and very hard to tell from standard largemouths.

What disturbs you about that, Xena?

I have never heard of these fish, thank you for sharing the information!

Yeah, but how do they taste rolled in cornmeal and fried in a cast iron skillet over a campfire?

If you go to the Leigh valley in Pennsylvania go to the covered bridge tour when you come to the hatchery just below the hatchery is a stream fly fishing only. Catch and tiger trout till your heart's content.

NICE! THANKS FOR SHARING. I have never heard of them until catching one yesterday.

Posted by MrLinkFly fishing IS sexy... Don't ever forget

Posted by MrLinkThe price of Happiness...

Posted by MrLinkThe Caddis Hatch on the Arkansas River near Cotopaxi, CO

Posted by MrLinkGreat spring fly fishing opportunities in the rivers across Colorado over the next month.

Posted by MrLinkGreat spring fly fishing opportunities in the rivers across Colorado over the next month.

Posted by LeutrelleI know this is not fly fishing, but it is as close as I can come:)

Posted by MrLinkThis weekend collection of armaments... Midges, flashback emerges, a few attractors and a scud or two. Heading up into The Cheese. ????