We rely on members to let us know when posts contain content that violiate the community guidelines. The most common reason that content gets flagged is that it contains dehumanizing or trolling/baiting text. Getting too many flagged posts will result in account termination.
7 8 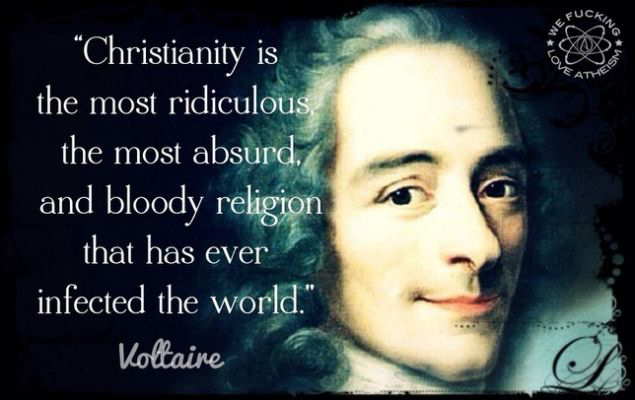 The Christian religion is the only religion that tells another religion (Judiasm) what their scriptures mean.

To be brave enough, in his time, to come out, as he did....was almost suicidal.

He was also a well known anti-Semite (against Jews) and he was fiercely racist.

"A tireless campaigner against injustice and advocate of religious and social tolerance, he was also fiercely anti-Semitic, describing the Jews as “an ignorant and barbarous people" and arguing that Africans are a separate species “as different from ours as the breed of spaniels is from that of greyhounds."

I don’t think it was that brave. He was active during The Enlightenment and was popular for his polemical writings against all manner of establishments.

@Geoffrey51 Sorry, Geof...you didn't read what I posted...and have little or no knowledge of Voltaire.

Have you ever been imprisoned and/or exiled for your writings? He was. I'd say he risked his well-being quite often.

Obviously he wasn't familiar with Islam, or the Torah, or the Aztec and Mayan religions, to name a few others. There's no shortage of ridiculous and bloody religions, past and present, although Christianity may be the largest.

He actually wrote in support of the Incas, so unlikely he was unaware of Meso-American cultures.

Most likely, though it was to be able to critise post-Columbia’s colonisation.

@Geoffrey51 No doubt. I just like seeing ALL stupid and bloody religions torn down, rather than just restricting it to xtianity.

I think most of us concur with that,

I think it's anything but ridiculous or absurd but it sure has a bloody history.