We rely on members to let us know when posts contain content that violiate the community guidelines. The most common reason that content gets flagged is that it contains dehumanizing or trolling/baiting text. Getting too many flagged posts will result in account termination.
8 0

Ok friends quick question one of my dipshits seems to of developed a cold of some sort...Before we go to the vet though, what are y'alls thoughts on pet insurance? Worth it or not? 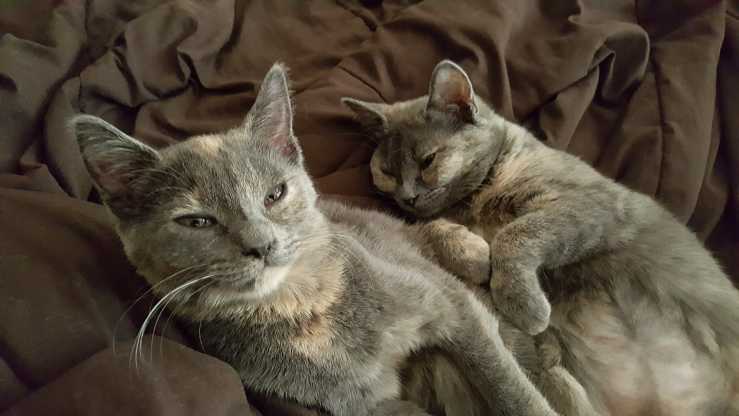 My older dog it wasn't worth it (most companies it has to obtained at puppyhood, then maintained), she's been remarkably healthy, and not injury prone..... our new puppy.... she's been to the vet 2-3x this year already....

Yeah I was thinking with these two,they are rescues and when I first got an they had a bad respiratory infection(which is what I'm thinking is the issue with the little angel on the left. So I'm thinking it might be worth it just in case there could be issues down the road.

With all I have seen, you still need to pay the bill up front, they just reimburse you.

Some of the established insurance companies are even offering this now. Probably better to go with one of them if you decided to do it.

I do not partake in pet insurance, though my cats are dear to me. The fact is that my cats are indoor only (strictly so) and I take them in once a year for a lube and tune whether they want/need it or not. That seems enough for everything shy of a terminal disease.

In the case of terminal diseases. One of our cats was diagnosed with throat cancer and the solution was to have surgery after which she'd have to be fed through a tube. We saw this as no real quality of life for this cat (who loved us dearly but was used to being the 'boss' of the house), we opted to NOT treat figuring that she wouldn't have long... she lasted at least another 5 years and no other vet diagnosed her with same. She completely cleared up and was fine.

Another dear cat was diagnosed with hyperthyroid. The treatment was to inject her with radioactive iodine, which the thyroid uses to function while nearly no other organ touches the stuff. This meant that for a number of weeks she would have periodic visits to the doctor for injections but otherwise her life would not be impacted. It would kill the Hyper part of her thyroid and one of two things would be true: she'd have NO thyroid, or there would be a portion of her thyroid that was dormant and that dormant part might wake up. She was fine for, again, at least 5 more years.

Both of these cats lived to 15 and 16 respectively. Both were happy campers until the end. The 'boss' kept the other cats inline, unfortunately, when she passed the order in the house was never really returned.

Years later, another cat came up with intestinal cancer... she was basically terminal. I was getting ready to go to Spain to study Spanish for two months. She would die in two months (no treatment) or she'd have 6 months of treatment and die. I opted to put her down immediately because either she'd be miserable, and die without me, the one human left she'd lived her whole life with, OR, she'd be miserable for 6 months and then die, with her human there for 4 of those 6 months. In that last case, WHO was being served, me or my cat? Part of the discussion my wife and I had previously had was that if we were just extending our cats lives so that they could be there for us, and the cats would be miserable... no. That's just selfish, not going to do it.

Another part of our reasoning was that you can't talk to your cat and say "hey, you'll be miserable for 3 months, then have these limitations for the rest of your life but you'll have more life." Cats just know that they are, or are not, miserable, and you are, or are not, part of said misery.

Back to the Insurance, out of 6 cats, the insurance would've only really helped with one cat. The rest of the bills weren't all that bad.

You have a really good heart.

It is always heartbreaking to say goodbye.

Why would you take your cat to a vet just because it has a cold? Does it have some special weak condition that it would not recover on its own just like you do from a cold? Maybe issue with breathing or some other unusual symptom that has you concerned? It does look like the cat has the caws up in the eyes indicating there may be some pain though, you know it best and do what you think best. And pet insurance is a complicated thing depending on how much you are willing to spend and what conditions each type of policy covers. Purebred cats tend to have more health problems, so in that case it might be worthwhile if you do.

Cats Do Not get colds as we know them. In the wild a stuffy nose would be a death sentence because of the noisy breathing warning prey and the inability to sense prey by smell.

@AnneWimsey True, but they do get similar effects from cat flu which is more common, and they usual recover without much problem. Naturally if there are symptoms of rhinovirus or something that is different.

She's a little mucasy..The bhad some respiratory problems when they were found and were put on meds and seemed to get better but the sudden influx of mucasy has me concerned.

Depends, in an emergency you would be glad to have it, and if they do develop health issues it makes a huge difference. But it's not critical, like human insurance tends to be. If there's a decent price and you can comfortably afford it, I say go for it.

Thanks dear..Btw I noticed were from the same neck of the woods.

@SensualAva ahh but I'm from SC...Originally Beaufort but lived in Lexington most of my life...Not to mention I spent many a good hour at Converse college..

If you do not get it when you acquire an infant animal, everything will be rejected as "preexisting"