WHEN MY BROTHER LEFT FOR NAM--We looked across the field of death & maiming, in our youthful half knowing, the war raging in the media suddenly close & personal,like a car crash

We drank to obliterate the obvious, threw peanuts at the Go-Go girl, who seemed amused, finally got kicked out of the bar, walked home in the post midnight dark.

He ran up a hill to obliterate the Viet Cong, Young officer asked what we were doing, said he was going to Nam, Cop seemed sad, wished him well.

Forward artillery observer at massive bombardment of Fue Bye, one round short he was gone.

Mop up at Danang, Played music for the V.C as part of military intelligence.

Young daughter of headman of hamlet he was guarding greased by a Cobra --she was in wrong area.

Dosed with Agent Orange, many medical problems, too much drinking, bitter divorce, 100% disabled

Meanwhile I protested the war 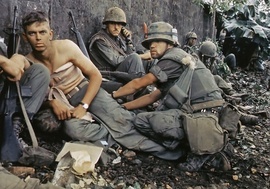 Posted by AllamandaNot in the current meaning of 'dog-whistle' but I think people will like this poem.

Posted by neutralite[youtu.be] today... was a day. ✂️ Squeak in the music room on this site, that's what to do.

Posted by RemiforceDEATH IS SO FINAL--Youth La Boheme days in our small boyhood town, drinking cheap wine, smoking grass all night in some artist's studio, staggering forth into the bleary translucent twilight dawn.

Posted by RemiforceWHEN MY BROTHER LEFT FOR NAM--We looked across the field of death & maiming, in our youthful half knowing, the war raging in the media suddenly close & personal,like a car crash We drank to ...

Posted by RemiforceMY AGE IS IMPATIENT.

Posted by BohoHeathenThis is just a poem of past experiences.

Posted by AstralSmokeWanting Wanting to be broken utterly split apart with a mighty tearing like an apple broken to unfold the delicate open veined petal pattern inside the fruit .

Posted by MiizzunderstoodWE WILL BE HOME SOON MOM.

Posted by Stargazer13And this is what you mean to me… That I see beauty and feel lovely in a dark, broken and rusted world Because you love me, I’ve been brave And opened into full bloom beneath the gaze of ...

Posted by Stargazer13Dog days are over Picking every four leaf clover Gonna break out of every box they put me in This soul is hungry and divine sugar my sin Personal evolution Fated love the revolution Raw ...

Posted by Stargazer13I've heard the stories of your empty world Devoid of soft touches And the rare souls that cross lifetimes, to see again through eyes captured in silent and consummate knowing I've listened to ...