We rely on members to let us know when posts contain content that violiate the community guidelines. The most common reason that content gets flagged is that it contains dehumanizing or trolling/baiting text. Getting too many flagged posts will result in account termination.
5 3

I recently read an article downplaying the importance of being concerned about asteroids and their possible impact with Earth. The article played and relied heavily on statistics. Here is the link to the article:

One error in the article: The maximum impact velocity for an object that has been orbiting the sun is 72 +/- few points km/s -- not hundreds of km/s. Now, to the business of doomsayers and their fearmongering. Statistics is an interesting bit of business. We use statistical analysis to make all sorts of pretty accurate predictions, but here is the rub: Accuracy depends upon sample size and even with a huge sample size, the accuracy is good, but not that good. Error ranges can be quite large at times.

I used a simple experiment with students to illustrate this point in relation to meteors and probable impacts. There are 45 confirmed large craters on Earth. There are another 16 unconfirmed apparent impact structures. These are representative of impacts large enough to do considerable damage up to and including extinction of the majority if not all life on Earth. A sample of 45 reliable strikes large enough to do severe damage, but I'll add in the others to pump up our sample to 61. With that in mind, I gave the sample a fudge factor (also to keep the math simple) and increased it to 100. I could have been more extreme by speculating on the number of impacts that have been erased through geologic activity, but didn't.

The question then was, with a sample of 100, can we reasonably predict when a particular event will occur? Can we even come close to what we claim as a statistical probability? You can do this one for yourself. Take 100 coins and begin flipping. Needless to say, the answer is no, we cannot even come close in either regard. To make this more apparent, the average class size was 24 (leaving out the partial student). Each student had 100 chips with a black side and a white side (I was too cheap to provide coins). Taking the results of all 24, we still had nothing even approaching a reasonable idea of when or what.

The gist here is, yes, we can safely say that major impacts are exceedingly rare. We can even be bold and give numbers to the frequency of such impacts. The facts are that we may not be hit for another 40,000 years – even more – but we will be hit. Maybe they’ll all be 20m or less, but that is unlikely. An occurrence in Las Vegas, NV, highlights this point (there have been many more examples through history). A roulette wheel in one of the Casinos landed on red 19 seven times in a row. Crunching the numbers, Beyond the Bets estimates that a roulette table will naturally produce seven of the same numbers in a row once every 114 billion spins. Well, there it was. From that wheel’s first spin to that time, the wheel was not in the vicinity of 114 billion spins.

What does that tell us? I don’t know about you, but it tells me that we could be hit before I finish writing this or that we won’t. Chance. Choice. Pick-a-winner. Do you want to bet the future of the human species on the latter, or do we set about doing something to spread ourselves out so that when our “114 billionth spin" is made, we are not eliminated from the list? A man walks out on a football field and is struck by lightning. I climb into my plane and at 10,000 feet the instruments all fail, control surfaces freeze, engine quits, and my seat belt refuses to release. It doesn’t matter what the odds are, it has happened and it is too late. I’m sorry, but I’m one who thinks mankind is worth saving for a glorious future of spreading through the galaxy and I would rather that be done by living humans and not the plasma they have become because we guessed wrongly.

Addendum to the above:

100 to 300 tonnes of meteoric dust enters the atmosphere from interplanetary space every day. That translates to approximately 36,500 to 109,500 tonnes per year. Other observations indicate that it may be much less than that. [ [universetoday.com] ] Cosmic dust enters Earth's atmosphere at speeds of between 11 to 70 km/s, seeding the atmosphere with minerals and metals such as sodium, silicon, calcium, magnesium, and nickel-iron.

Here's an easy experiment you can do at home to see this for yourself:

Line the cookie sheet with the plastic wrap. Fold the edges of the wrap under the sheet, so it won't blow away. Place it outdoors in a place where nothing blocks the sky and the sheet is protected from the wind. Let the sheet remain outdoors for at least a week. When you bring it back inside, the plastic will be covered with all sorts of debris. If it has rained, it will be full of water, too. Straining the water through a sieve will help get rid of any large debris, such as leaves and bugs. Carefully run the magnet through what remains. A piece of paper wrapped over the end of the magnet will make it easier to see and remove whatever sticks to it. (Another method is to fasten a couple of magnets over the downspout of a rain gutter so that rain water runs over them.)

You will find some small particles sticking to the magnet. These are the remnants of metallic meteoroids that disintegrated in the upper atmosphere. They stick to the magnet because most meteoroids have iron and nickel in them. Look at the particles through the magnifying glass or microscope. Surprise! You now have a meteorite collection. Incredibly small, but impressive. 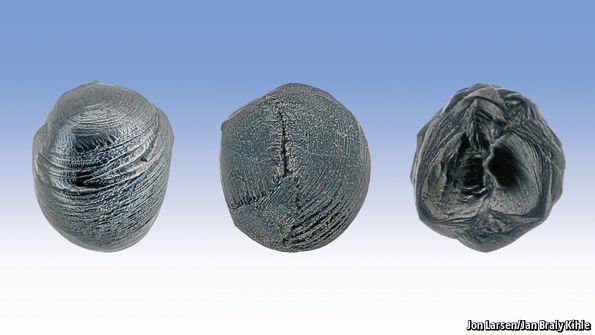 Only a couple have so far come close to the actual meaning of the article. No, I'm not going to explain quite yet.

So,do ya launch a team to blow it up(hopefully a long way's out),but improbably at best,design an build a weapon to break it up,(but again now instead of one impact you've got like a shotgun effect,maybe doing more damage)?

The amount of money being spent on asteroid defence is beyond trivial. Considering the potential damage of a large one hitting, we should be spending more, not less. While I agree there's no point of the average person worrying about it, the risk is real and spending more on it would be completely justified.

However science never neglects the fact that we have been hit and will be hit again, Yes the non science person hears that all incoming are doomsday, we who love science know this is not true. But then again, with our fragile atmosphere and the waste stored interior earth, there is no way one can say we are in the clear.