Pascal's Wager is the philosophical concept that puts the Christian faith (mainly) into 4 categories.

1.) You believe in Christianity. If it is true, you go to heaven. Nice.

2.) You believe in Christianity. It isn't true, you good. No eternal damnation.

3.) You don't believe in Christianity. It isn't true. You good, no eternal damnation.

4.) You don't believe in Christianity. It is true. You're fucked. You experience eternal damnation.

I have two main thoughts about Pascal's Wager, both of them being immoral in my perspective. That is:

I know there is much more regarding Pascal's Wager (e.g., the history, how it was constructed, how it is used, what other faith[s] utilize it) that I don't know about and simply didn't post because I am lazy af.

I want to hear your thoughts. Leave some comments below. 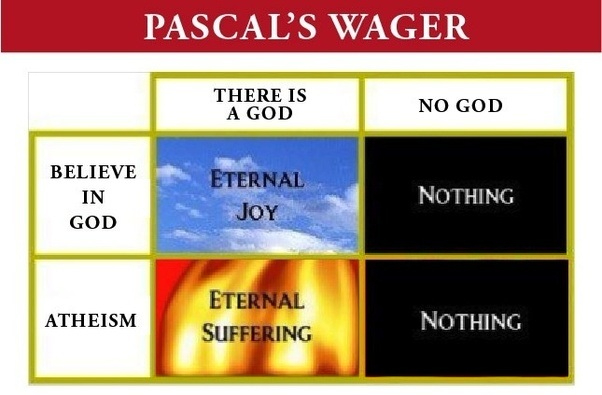 Can you really "choose" to believe? If so, how?

Guys, thank you for the input. I looked into some of the content of the links already - I will finish reading them soon.

There isn't much logic behind Pascal's Wager. It implies that you CAN believe in religion "just in case" whereas I really can't.

Yes, I agree that it over simplifies that matter.

I think the below comments about covers it. Therefore, I don't have anything to add, which is good because I'm lazy af also. Actually I'm sfl I didn't read all the comments.

There are 3 issues I take with pascals wager

1 It is a scare tactic to make people believe
2 It pretends the choice is 50/50- believe and go to heaven, or not believe and potentially go to hell

The choice in theory is infinite. There are all the gods that have been created so far (approximately 1000) plus all the other gods that have not been invented yet. Whilst no argument for any god stands up to any kind of scrutiny, Belief in the wrong god may be just as bad if not worse than no belief at all.
My argument back is this 'Imagine a 3 legged Unicorn that shits rainbows out of its arse. Then, Imagine that this unicorn decides whether you go to heaven or hell when you die, and if you don't believe in it then you go to hell'. I am imagine they would seem pretty dismissive of the unicorn, if so, explain to them that there is no more evidence for god (Christianity) than there is for the 3 legged unicorn that shits rainbows out of its arse.

Imagine for a second that there is a god (a being that judges you when you have died, that was able to observe your entire life, and read every thought you ever had). There would be no point what so ever in lying to that god, as it knows every thought you had throughout your entire life. If you only believed in god for the sake of pascals wager, that god will know this. If I die and I am wrong and there really is a god, atleast that particular god will understand that I came to my decision as open and as honestly as I possibly could, without bias and without prejudice, and who knows, maybe that in itself would be rewarded. Feel silly about assuming there is a god, but sometimes you have to put yourself in that situation to get across your point

The End of Pascal's Wager

That makes my head spin.

This is a very concise video of why Megan Phelps Roper made her decision - mainly talking about how God's will includes blessing some people with many benefits (I guess we can call them) and damning people eternally for the sake of "God's will."

The flaw is category #2. If a different religion (or even a different set of Christian beliefs) is true, you're fucked and you experience eternal damnation (depend on which religion was correct).

The second flaw is category #3. In that case you will have wasted a finite resource (your time) for nothing.

Time is never wasted, my friend.

This topic of Pascal's Wager always makes me think about what so many in my very religious family used to tell me. I still hear it once in a while, but for the most part they seem to have given up on me (finally!! lol)

They would say, "Well given the horrible price you'll pay if you are wrong and God does exist, don't you think you should pray to Him, just in case?"

Hmmm. Perhaps I shouldn't be so surprised that they leave me alone these days. lol

One of the most common objections to it is that if there was some other faith out there that also claimed you went to hell if you didnt follow it you would have to follow both, but since you can't follow both at the same time even if you were a christian you only have 50% chance of getting to heaven if there is an afterlife.

To make it even worse given how long humanity has been around doubtless there is more than one other faith we have come up with that promises hell to non-believers. Each one reduces your chances of heaven by a factor of 1/n where is n is the number of faiths. As n approaches infinity you have zero chance of heaven even if there is an afterlife.

The biggest flaw I always found in this is that it kneecaps their own god. I basically implies that you can just outwit and trick God into thinking you believe in him. It goes against the very principal of said god being omniscient, all knowing ect....

You honestly think an all knowing God wouldn't be able to tell the difference between and honest and dishonest belief? I had someone pull this stupid wager at work, "you know, better to be on the safe side", and I just threw that one wrench at them and they had nothing to really say.

Let's take a sideways glance at the reasoning and how it might be applied for the sake of guaranteeing entry into the eternal Kissass theme park:

Ask this question of any christian and the likely answer will be, yes: Is it true that when really young children die, they get a free pass to Buttkiss Park? Using this reasoning, it would be wise of the faithful to kill their children to make sure they get in rather than risking the chance that they may convert to some other religion or even worse, fall away and become ... become ... Ohmigod ... atheists, or even scientists.

Then there's that other weird angle. The wager makes a godawful assumption. What if the Big Guy in the Sky is really Zeuss, or Bacchus, or Balder, or ... well, you get the idea. It seems that the wager is being made against an even bigger wager. That is, it assumes the deity is this one and not one of the others, but no one can know that with certainty. So you bet on the wrong one and ... holy shit, there goes all that effort down the drain.

What if ... there are an infinite number of gods and antigods? Your odds get worse than the national lottery. The list of possibilities and potential logical fallacies is almost endless and faced with that, it becomes obvious that the wager is not all it's cracked up to be. It begins to look like Old Blaise wasted a lot of verbiage.

I'd like to go on, but I'm getting old and I tire easily.

If I was god, I'd be insulted that belief in me was nothing more than an insurance policy.

@JimmyM - Wrong, I would only care about what people thought in order to maintain my reputation for overseeing trivial, unimportant matters that might slight my 13-year-old ego.

What if God doesn't care whether you believe? Why does God have to care?

What if God is incapable of knowing whether you believe? Why does God have to know?

What if you're wrong about how God treats non-believers?

How do we know anything about what God is like in the first place? How could we?

That little theological Punnett square is an example of abhorrent hubris. I reject any premise that claims to have a lock on the nature of God.

You can include a link to this post in your posts and comments by including the text q:17931
Agnostic does not evaluate or guarantee the accuracy of any content. Read full disclaimer.