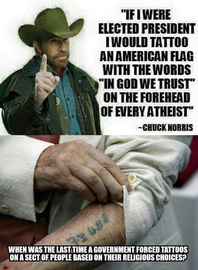 Here is the piece in full

I was wondering the other day, if I ran for president, what would be my campaign promises?

I made a list I'm certain can get me elected.

If I'm elected president, I will…

Require members of Congress to work out on the Total Gym 15 minutes each day – or else they can't vote on anything.

Cut spending by dismissing the Secret Service, at least for my eight years in office (why would I need them?).

Resurrect Bruce Lee and appoint him head of homeland security (OK, the CIA and FBI too).

Turn the Rose Garden into a new fighting ring for the World Combat League, in which liberals and conservatives will fight for legislative leadership and priority. (For fun, Saturday night fights will feature a recurring bout between Hannity and Colmes). "American Idol" already told me they will provide the entertainment.

Require Bill Gates and Warren Buffet to personally pay for national, comprehensive medical coverage for every American (or meet me in the Rose Garden).

Increase jobs in America by sending ninja teams to sabotage and steal them back from other countries.

Tattoo an American flag with the words, "In God we trust," on the forehead of every atheist.

Give a tax credit to anyone naming their children Walker or Texas Ranger (excluding Will Farrell).

Resolve the Iraq war by bringing all of our military personnel home immediately, then going over there by myself for "martial arts negotiations."

Hang Saddam Hussein (Whoops – scratch that – already did it undercover).

Convey my plan for world peace to the United Nations: taking the governor of California with me on our "kick butt and ask questions later" USO world tour.

Give every new military enlistee abroad a copy of my upcoming new book, "The Threat of Justice," with the words, "Arnold and I will be back to pump you up!" above my autograph.

Bring on Donald Trump as my apprentice. When my presidential term is complete and he has obtained his black belt, or whichever comes first, he can buy the White House and of course rename it (to, what else, "The Trump House" ).

Create new immigration legislation: to deport all liberals (then force them to listen to Bill O' Reilly every day for five years, at which point they may return).

Ask producer Mark Barnett to film "Survivor – Camp David," where world leaders will meet annually, for an all-out cage-fighting championship. The winner will take home $1,000,000 in Disney Dollars, good in Europe or America.

Send an autographed photo of me and my horse (no dogs in my White House) to everyone who commits to read my new WorldNetDaily "presidential column" and blast a blog who dares to disagree with me.

Complete the plan to bring Tony Blair to the U.S. as my vice president.

Expose the real WMDs – my fists and feet.

Replace Letterman, Leno or Conan once monthly, since stand-up comedy is what most governmental officials do anyway.

Ask Al Gore to provide me with a special governmental study on the connection between spotted owl extinction and global warming. (I'm pretty sure Michael Moore will film the docudrama).

Help Rosie transition from "The View" to the pew – it might help her get over that anger problem. If the pew doesn't work, she can spar Trump in the Rose Garden.

First and foremost, however, my greatest priorities will be to …

Personally smoke out bin Laden by myself and round-house kick him all the way back to America, where my United Fighting Arts Federation will handle the justice issues.

Make all Chuck Norris facts come true (well, not quite all of them – I'm a happily, married man!)

Looking over my campaign promises, I'm sure my liberal friends are even now rejoicing that I'm not really running for president. However, my hope is still out that Newt will jump into the race!

It was a joke, I've posted the full article above

Who is Chuck Norris ?

I don't know much about him - some sort of actor famous for playing badass roles or something.

But I have a chicken named Chick Norris.

He's a rightwing nut who used to be a TV actor turned infomercial bum for Total Gym.

@LenHazell53 oops and B movie actor

@LuvLayne
To be honest when I was a kid I did like "Good guys wear black" pretty good martial arts fick.

You can include a link to this post in your posts and comments by including the text q:530546
Agnostic does not evaluate or guarantee the accuracy of any content. Read full disclaimer.