As Judge Ketanji Brown Jackson moves closer to being confirmed as the next Supreme Court justice, the clearer it becomes that much of the public will be pleased when she’s sworn in. A FiveThirtyEight report explained:

A day later, a CNN report added, “According to an average of polls by Gallup, Fox, Monmouth University, Quinnipiac University, and the Pew Research Center, about 53% of Americans supported her confirmation, with about 26% of Americans opposed. This is good for a +27-point net popularity rating.”

What’s more, Republicans took the judge’s confirmation hearings in an unusually ugly direction. Their lines of attack, among other things, included “barely coded appeals to racism“ and messages that appeared designed to appeal to adherents of the deranged QAnon delusion.

And yet, none of these tactics had the intended effect. Jackson remains on track to be confirmed, probably next week, and polls suggest the attempted GOP slander did not undermine public support for the jurist’s nomination.

All of which suggests several Senate Republicans humiliated themselves and tarnished what’s left of their reputations with little to show for their efforts. 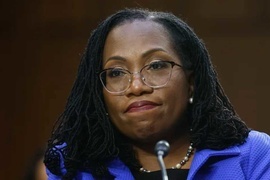 Recent polls have her public support at about 66%. That is enough to win a close vote in the Senate, which inherently strongly favors the GOP and will only get worse over time. Hopefully, she has a long career ahead on the Supreme Court, because she is not very likely to any like minded colleagues follow her any time soon. My big hope is to someday dispose of the Senate and have a functioning government again.

Republicans have absolutely no leg to stand on considering the miserable judges they picked. The drunken, sexual predators they choose showed how hypocritical and screwed up Republicans are.

In a battle of wits they are defenseless

Tarnished what’s left of their reputations?!?!?

The GOP soiled themselves.

Excellent qualifications. What else matters? wtf

You can include a link to this post in your posts and comments by including the text q:658223
Agnostic does not evaluate or guarantee the accuracy of any content. Read full disclaimer.