We rely on members to let us know when posts contain content that violiate the community guidelines. The most common reason that content gets flagged is that it contains dehumanizing or trolling/baiting text. Getting too many flagged posts will result in account termination.
Visit Group Join Group
1 4

There will be some TMI, which I will mark so you can skip if you don't want to get grossed out.

Today was my moms birthday. I managed the hazardous trek up stairs to attend her birthday lunch. I ate a slice and a half of pizza and chatted with my family for about an hour before retiring to my dungeon to rest.

I am still sleeping and waking in intervals of a few hours each, but my waking has been steadily getting longer.

After two sleeps and wakes, I managed to put a folding chair in the bathtub and procure a large bucket from which i managed to sponge bathe myself and change into clean jammies. This was an extraordinary feat that was a little reckless considering. I just have a hard time asking for help. After cleaning myself and redressing my body and incisions, I proceeded to sleep again.

I've been struggling the most with the surgical gas and constipation. The procedure left my butt hurting so clenching was a no-go and I didn't have a BM since Tuesday. Naturally this leaves me bloated and with massive abdominal cramping.

I finally had a massive bm and released a lot of the trapped surgical gas. I feel much better now. Also, my hopes of having a menstrual free recovery have been dashed. My uterus is protesting my sterilization with the utmost frenzy. How droll.

I'm lucky my obgyn is actually on call this weekend because I've noticed my stomach is covered in little red dots that look like hives but are not itchy or raised. I called her up and she says it's probably an allergic reaction to the soap they used to sanitize my stomach before the surgery, but to call her again if it gets worse or spreads but right now she doesn't believe it to be a staph infection or anything.

My incisions are bandaged with star wars bandaids, so that's fun, except one incision is inside my belly button.

That's weird because they all itch like crazy but I know it's cause they're healing.

I have a giant bruise on my hand from the nurse blowing my vein.

My best friends sent me the most beautiful flower arrangement. It's so sweet.

Also before surgery I was in the waiting room with my mom and this old guy and lady were LOUDLY talking about how trump is the best and Obama is bad and Mexicans are all drug dealing criminals and muslims are terrorists and blah blah blah.

My mother, ever the passive aggressive, kept groaning and rolling her eyes but finally when he started digging on trans and lgbt+ I stood up and marched over there. My mom was freaking out trying to stop me.

His, the lady, and my mothers jaws all hit the floor. I guess I looked like I was gonna have a full blown knock out drag out and everyone was surprised at my respectful and cavalier attitude. I found it hilarious how everyone expected me to just lay into him. Oh and I wanted to so badly but even though I was a patient that day I do still work there.

He sat there quietly looking scolded long after my surgery began, according to my mom.

Anyway, my doctor took a few pictures since I am not allowed to keep my innards in a jar. The uterus and ovaries look so different than the illustrations we normally see. My uterus is a cute little balloon lol and my ovary looks like a cocoon.

If anyone wants to see the pictures PM me, I won't post them publicly for those who are easily grossed out. Instead here's the cute flowers! 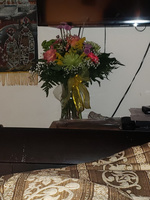 On a scale of TMI that didn't make me wince.

I hate those damn navel incisions - they're a pain in the navel years later - but remember I have multiples - something like five or six?

Yay you have achieved poop! I would have recommended some mineral oil. Or colace. I know women who smuggle the stuff into the hospital when they have babies.

That trapped air is no joke.

Sorry about the additional pain. I had that too. So unnecessary!

People get weird about poop lmao

It only took like 6 laxatives to get shit moving hahaha

@LadyAlyxandrea They don't let you leave until you poop after you have a baby - or that's the way it used to be.
Maybe only after a C-Section? I'm not sure.
But yup - those bottles got smuggled in. lol

I hear the stories.

Posted by Sonja44Sums it up.

Posted by Sonja44This meme cracks me up. I'm Fine.

Posted by PiperMckennaAlways cold + sick days = Mermaid. Sometimes living with peoples who like the AC isn't such a bad thing.

Posted by PiperMckennaI'm quite prone to bruising because of EDS....any tips on how to reduce the look of bruises? Ideally I'd like to prevent them. But it's too late for that today. haha

Posted by LadyAlyxandreaI didn't learn my lesson well enough in March when my incisions refused to heal because i was working the crazy shifts.

Posted by ponz111I have restless leg syndrome which is not uncommon but with me it is my whole body which has the complusion to move.

Posted by LadyAlyxandreaPost op day 3 update: There will be some TMI, which I will mark so you can skip if you don't want to get grossed out.

Posted by LadyAlyxandreaBehold!!!! My weightloss progress thus far!!!! And an update: Surgery in two days.

Posted by LadyAlyxandreaHow it feels going to the doctor

Posted by LutherzmeAnybody else have to do this once a week?

Posted by LadyAlyxandreaPsst hey kid.... You wanna see something cool? (I scared the shit out of my ortho p.a. as he walked by my office. It was freaking hysterical)

Posted by LadyAlyxandreaFor today's game of "whats that weird random pain" I broke my big toe.

Posted by LadyAlyxandreaSo I finally have the date for MEETING my new neurosurgeon.