We rely on members to let us know when posts contain content that violiate the community guidelines. The most common reason that content gets flagged is that it contains dehumanizing or trolling/baiting text. Getting too many flagged posts will result in account termination.
Visit Group Join Group
4 13

I honestly laughed out loud at this one. 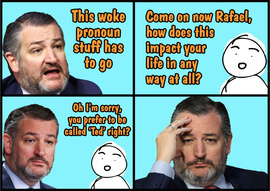 One of his friends here. 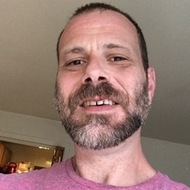 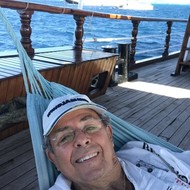 I actually do think it's pretty silly that this is a hill the Democrats are willing to die on. Children being told they're extraordinary, unique, special, and amazing every minute of their childhood is part of, or maybe the primary cause of all of this. The children start to grow up and their experiences in the world don't comport with everything they've been told their whole lives and rather than accept that they're practically identical to 8 billion other useless parasites walking around on Earth, cognitive dissonance takes over and, boom, "I need a pronoun JUST FOR ME because I'm so fucking special and different from everyone else."

Not only is your pronoun wholly unimportant to your life, but your name and gender don't really mean shit either. Since the dawn of mankind, I have to imagine some have dealt with others thinking they are a different sex than they were and those people didn't shrivel up and die as a result. Who among us hasn't made that mistake before? Sure, it's not great, but the person likely didn't freak out on you. It was an honest mistake, and life went on. As for the name, people at work call me Larry. Don't know why, that's not my name. But I really don't give a shit. I'm not my name. And what people think of me, how they treat me, or how they interact with me is also independent from what name they use for me. Hell, even my given name is arbitrary. My mom could have called me anything. Honestly the only time it really means anything is when you have an ethnic sounding name on an application, the person is racist, and you're not in person, or maybe some other fringe cases. So the cartoon probably isn't making the point the author intended.

I disagree. The people who insist on addressing people other than how they wish are the immature ones. 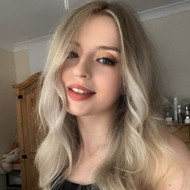 Posted by OldMetalHeadWhat in the Unmitigated Fuck?

Posted by glennlabHow can I explain this simply

Posted by glennlabShout out to all you survivors.

Posted by OldMetalHeadSorry for being a pig. The struggle is real!

Posted by OldMetalHeadNow, anytime I hear that alpha-male stupidity, I will think of this 🤣

Posted by glennlabWhich one is it for you?

Posted by OldMetalHeadCan never be too careful...

Posted by bookofmoronsPretty much my life in 2023 so far

Posted by KilltheskyfairyI know the feeling…