Hi all, been awhile since I've done a post in this group, and I'm sure everyone here is just absolutely delighted to see me post again, lol.

Recently been doing research on gun control laws over the years and how such is connected to racist policies, and my research turned up some interesting (but not surprising) results. Out of the four sources I am going to link to, wanted to point out that the Mises Institute source aside the other three are known to lean pretty heavy to the left (just their names alone would indicate they lean left), and it's my understanding that any left-leaning sources are pretty much accepted as gospel truth in this group. Here they are- [democraticunderground.com]

From one of the linked to sources above: "Today, the forces that push for gun control seem to be heavily (though not exclusively) allied with political factions that are committed to dramatic increases in taxation on the middle class." That sure describes the modern day Democratic Party well where the taxes are concerned, and you certainly couldn't blame that one on Republicans as they constantly look for ways to decrease taxes (perhaps even to some of those who don't really need the tax breaks).

Also from one of the sources above: "Similarly, many gun control laws impinge on that most fundamental of rights: self-defense. Racism is so intimately tied to the history of gun control in America that we should regard gun control aimed at law-abiding people as a "suspect idea," and require that the courts use the same demanding standards when reviewing the constitutionality of a gun control law, that they would use with respect to a law that discriminated based on race." Quite true, and if one were to study the history of American gun control laws through a strictly independent lens, one would find no shortage of evidence to indicate that gun control laws have been and continue to be extremely racist in nature and meant to help undermine the rights of minorities such as blacks.

Don't believe me? Look to the city of Philadelphia for example, a far-left progressive "paradise" that is absolutely riddled with some of the most violent forms of crime imaginable, and Philly also has some of the toughest gun control laws on the books in the whole state of Pennsylvania. Funny thing is, despite Philly's tough stance on private gun ownership that for the most part won't get in the way of wealthy white folks who could use their wealth and connections to still get what they want, nor do such laws get in the way of the criminals or gang members who have black market connections. Do you know who pays the most for such laws? You guessed it, minority populations namely the blacks that are the most negatively impacted, as between the restrictive laws and lack of extra income or connections has left law-abiding black Philadelphians at the mercy of the criminal gangster element, and countless innocent black lives have been lost over the years due to the laws in place totally failing them by stripping away their right to self defense.

The resentment and rage against so-called gun rights groups like the National Rifle Association (NRA) is laughable if one knows the history of the NRA and how repeatedly in the past they were responsible for helping enact certain gun control laws. For example, in 1986 then President Ronald Reagan with the encouragement of the NRA passed the Firearm Owner's Protection Act which made it illegal for any private citizen to own fully automatic firearms from that time forward. That was decades ago. A modern example of the NRA assisting with getting gun control legislation passed would be then President Trump's bump stock ban, which oddly enough was more than what Obama accomplished during his Presidency. Trump didn't just think that ban up on the spur of the moment either, he did so at the suggesting of the NRA. That said, knowing full well how in both the past and present time the NRA had assisted with getting gun control laws passed is one of the reasons why I have never supported the NRA.

In closing out this post and speaking about racist policies etc. here (which gun control laws have been and continue to be racist in nature), I have a question for the members of this group. Unless any of you here state otherwise, I will conclude you all are against racism or racist expressions of any sort and consider yourselves to be firm anti-racists. So my question is, are you all aware of the fact that a few years back on this site the very creator and host of this group did a post stating that he believed there was nothing much wrong with using a common racist term to describe a black individual, and here is a link to that post- "I don't know how many are here, but I would like to ask the black people on this web site a serious ..."

How well does that sit with you all, knowing the host of the gun control group thinks like that, and that kind of makes me wonder how many more racist gun control activists are out there or even on this site? Certainly no genuinely liberal sentiment there, as a true liberal would never talk like that, I take it that's a progressive thing and fairly certain the host of this group refers to himself as progressive. If you happen to come across this post Mike, I can understand your concern on that matter and can agree with you on the forgiveness part, but I suspect a good portion of your fellow progressives would not be as forgiving or understanding as you would be, and some of what you said seriously didn't make it look good for you or help your cause much. Full disclosure, for any of you who weren't previously aware of this, but at one point I myself was a gun control advocate, and a rather radical in-your-face anti-gun zealot at that.

Upon carefully reading with an open mind the sources I linked to above, maybe just maybe you will realize why I and so many other fellow Americans have not and will never agree with such laws that are connected to a horrible racist past and that to this day continue to negatively impact minority populations, aside also from the obvious fact that gun control laws have failed to keep our society safe. Kinda sounds like the definition of insanity there, repeating an action which has demonstrably failed and yet keep trying the same method believing you will achieve a different and meaningful result.

Please note my restraint on talking about pointing out what should be the obvious regarding a well known segment in society who are mostly unarmed by their own choice and whom of which have recently witnessed their bodily autonomy rights come under serious assault by ruthless and cowardly politicians, but I digress, as that's a whole other situation best left for discussion in a future post perhaps. As for the attached quote from Frederick Douglass at the bottom, based on current evidence and independent historical references Stephen Decatur Miller probably should receive credit for the earliest quotation which referenced three "liberty" boxes in 1830. During the ensuing decades the saying evolved and variations of boxes were mentioned. Frederick Douglass was one of the prominent figures who employed the saying, which is why I went along with his take on the subject. Being he had the misfortune of experiencing slavery directly I'm sure he knew what he was talking about there, far more so than any modern day progressive gun control activist could claim. 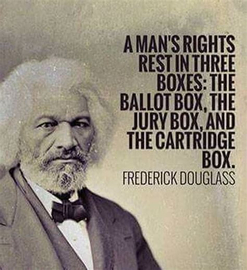 Posted by ButtercupIn addition to good guys with guns being ineffective, the premise is defective.

Posted by phxbillceeSMH at the idiocy...