A Reminder to the ammosexuals... Slave Owners used to had the same Argument you use today.... 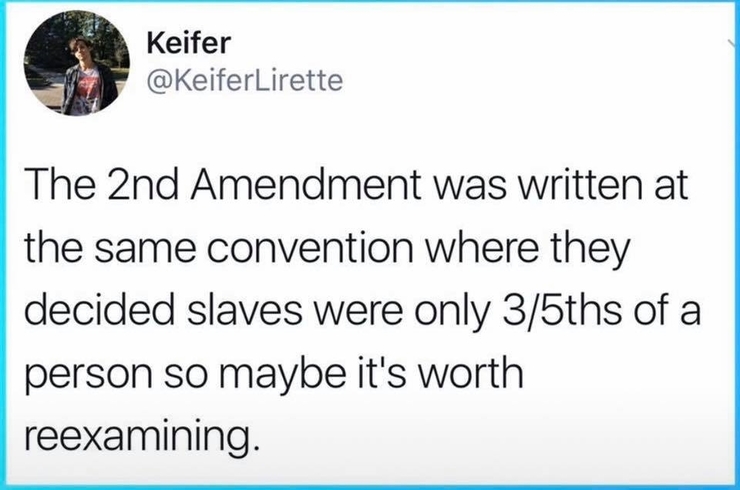 That was also the same convention where they decided to give the free speech needed to express this opinion. The 2nd Amendment has been reexamined by the Supreme Court and they confirmed it. Sensible regulation is one thing but when you advocate repealing the 2nd Amendment, that's where we split hairs.

Also, how does arguing in favor of gun rights have any resemblance to the arguments used by slave owners? Just because the 2nd Amendment was written at the same convention where a compromise on representation was reached doesn't mean they had anything to do with each other. You could say the same thing about any of the other amendments in the Bill of Rights and you'd be just as wrong.

ammosexual speak. little more on the subject of sins of ameriKKKa...
[face2faceafrica.com]

@GipsyOfNewSpain That's a very clever remark, straight out of the trumpian playbook. If you can't refute someones argument logically, just call them a nasty name. Lazy and intellectually negligent.

Read that before. Also remind the gunnuts that when that was written, you'd be lucky if you could fire 3-5 rpm. Your m-16 or m-4 can empty 30 in 4 or 5 seconds. Your m-134a can fire 8000 rpm. M1 is a 90mm used to take down tanks. Some gunnuts think all these should be legal. No realistic reason for a civilian to own one. Lots of gunnuts think they are taking our ar-15s! It is one of the most popular firearms in the us. Not practical for home defense or hunting. Std gi mags are 30. Don't get that deer on the first or second shot, then you need to spend more time at the range! You can only have 5 rds for hunting here. Most 5.56x45 are 55 gn. Need a min of 62 for deer (even tho I know a few people that can kill a deer with 22lr- but these are certified experts).