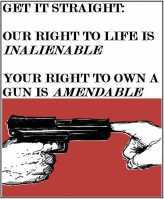 Does your right to life include planned parenthood and all the murdering of babies too young to speak for their selves before you kill them? i reckon not ... hypocrites

I agree with your meme, "Your right to own a gun is amendable". But there is no need to amend the Second Amendment because it grants no right to individuals. The right to bear arms is granted to "Well regulated militias".

They don't know what "militias" means, so they ignore it.

you DO NOT need a semi or automatic weapons to hunt or defend your self, only terrosist need such a weapon, if you need one then YOU ARE THE GREATEST THREAT TO OUR NATION.

There is so much more to this issue than how many and what kinds of guns people have or do not have. The infection needs to be neutralized before any bandaid will work.

I'm sure the Jews from WW2 Germany would agree... or the Chinese under Mao... or the Russians under Stalin... oh wait. They're dead because their governments killed them. If only their constitution had allowed them guns to defend themselves and their families.

Let's be fair, even if they had guns they probably wouldn't have used them. Their lives probably didn't mean that much to them anyway.

Or maybe they did want to live, to protect their families. But they were unable to do so because they were rendered defenseless?

Protect their families from what? There are over 300 million people in this country. The odds of someone breaking into your house while you are there are way worse than winning the lottery. All of your arguments are bullshit as I have told you before. What are you people so scared of that you have to keep up with the same bullshit excuses. The only legitimate reason anybody can have for having guns is for target shooting and putting food on the table. The odds of having to protect yourself or your family are worse than winning the lottery, which means saying that is bullshit.

Without followers with guns the Nazis, Stalin and Mao would never have come to power. Your argument is a busted flush.

I think a rifle and hand gun should be enough to protect ot hunt food to eat.

Have you ever tried to eat something, anyting that been leaded 15 times while being hunted?

@GipsyOfNewSpain i do not hunt, rarely eat meat. if i do it is all organic and it might be 6 months before I have any again. I eat all organically grown vegetables and if i eat any grain, it is gluten free. So I not you average run of the mill sit in the woods and eat type gal. For those who love it, Hey, fill your belly until you can't move. As far as guns, c'mon you ain't playing with a stupid here. They make 30 aught 6 rifles and such.. A rifle may spread with a regular one and the bullet, but they make regular one bullet rifles that are good for hunting. What good is a deer that you shot 50 times with an AR15? Better yet, you ever bury one of these kids riddled with bullets from an AR15

@BettyColeman I reckon you support hunting and fishing as a sport. I am being honest... I don't Hunt, I don't Fish. I don't murder teens or see deers as apt substitutes for children as frenzied moving targets.

@GipsyOfNewSpain I never thought you did. I know you are a sweet positive type person. We have commented before. Most men do hunt for sport and do not eat what they kill. I am an activist for the planet, humans, and all life that lives there. I have no regard for trophy killing as our 45 and his boys do. Everytime I see an endangered animal killed I get sick. I love animals and birds. Sometime I will tell you about my little dream home. I actually do most of my own cooking because I am so picky about what I eat. I don't want no animal antibiotics, pesticides, hormones, or other additives. Over the year I guess I just changed some life style habits. I like natural cures. For instance I will burn a rich lavender incense because it is good for relaxation, inflammation , and helps you sleep. I don't know why I am what I am, but I just am. If I saw a person abuse another person, an animal when I was out, I am the type to get out, argue and call the police. I love ducks, swans, all birds, parrots, pigmy goats and pigs, and those mini horses, dogs, cats, and rabbits and those fancy show chickens! lol Betty

@BettyColeman for all you do and not do I Salute you... never got the vibe of hunting as anything positive at all. And I recognize some grew up in that culture of killing for sport... just no sport of mine and you see the damage done to the animal doesnt matter if 1 hole or 15 holes, nothing dignified. Continue being a good human.

@GipsyOfNewSpain I have, biting into little lead shot is a feeling I would like to never do again.

Posted by KojaksmomNever looked at it this way, but this is true. The American public is powerless against protecting ourselves from the police.

Posted by TheoryNumber3Explain that, evangelicals

Posted by mariposalover92Saw this sign in neighbor's yard 2 streets behind me. Thought you guys my want to discuss it.

Posted by MsAlThis is almost as dumb as when they were aiming them at their privates to own the libs on Facebook..

Posted by GipsyOfNewSpainI am watching a Show about The DC Sniper.

Posted by LuvLayneWearing 3 guns in a grocery store... WTF for?!?

Posted by GipsyOfNewSpainIn a christian, racist nation this was sold as a toy... guess the Nation... clue: before nra.

Posted by GipsyOfNewSpainWhen you get Arrested and the Least of your Charges is Driving Under the Influence. Another "Registered, Responsible Gun Owner" Caught Planning a Mass Shooting with 20,000 Rounds. [cnn.com]

Posted by GipsyOfNewSpainAmmosexuals in Kentucky.

Posted by DruviusMade me laugh.

Posted by TheGreatShadowFriend of mines dad posted this. He is a Marine. This is damn true.

Posted by JackPedigoMaybe it's not just guns that need regulating.