We rely on members to let us know when posts contain content that violiate the community guidelines. The most common reason that content gets flagged is that it contains dehumanizing or trolling/baiting text. Getting too many flagged posts will result in account termination.
Visit Group Join Group
6 4

War criminal Rumsfeld dies, but his militarist legacy lives on

That Rumsfeld reached the age of 88 without ever being tried as a war criminal, much less being locked up for his crimes, is testament to a breakdown of international law under the relentless assault of American militarism. It is also a product of the complicity of every institution of the US establishment, its two major parties, its corporations, media and academia in the crimes of mass murder and torture, along with the assault on basic democratic rights, with which Rumsfeld’s name will always be synonymous.

These crimes, widely interpreted as a loathsome aberration when he was in office, have since become fully normalized under both Democratic and Republican administrations.

And a vast majority of the American people. Our society is profoundly sick.

{These lies in service of war were amplified by the media, with the New York Times, the voice of the Democratic Party establishment, in the lead. During this period, Rumsfeld was lionized by the press, with his face plastered on magazine covers and his platitudes about transforming the military and “unknown unknowns” treated as genius. The US News & World Report noted during this period that Rumsfeld “routinely has the press corps doubled over in fits of laughter.” What the media found funny revealed a great deal about the disintegration of democratic sentiments within the US ruling establishment.}

The families of nearly 5000 dead weren't laughing though. Or those and of the many that will never fully recover from various other injuries either.

More than 7,000 US troops have been killed in Iraq and Afghanistan, with hundreds of thousands returning with grievous physical and mental wounds. As of 2018, 1.7 million veterans had reported a disability stemming from their deployment.

Not a single person in DC should have gotten a single vote to remain in power. What the fuck are people thinking to keep supporting the likes of those who will turn us into sacrificial lambs for profit!?!

{Indeed, under Obama, US military operations continued in Iraq, were massively escalated in Afghanistan and extended into disastrous wars for regime change in Libya and Syria. The dirty war tactics elaborated under Bush were expanded into a drone missile assassination program across the globe, while the wholesale spying upon the people of the United States and the world only intensified.}

Come on! Lets do it again!

{Today, the prison camp at Guantanamo remains open. The war in Iraq that Rumsfeld assured the media would last no more than five months continues, with the Biden administration ordering airstrikes against targets on both sides of the Iraq–Syria border this week.}

{It is this continuity of imperialist policy that explains the attempt to whitewash Rumsfeld’s criminal legacy. Speaking for the Biden administration, Secretary of Defense Lloyd Austin praised Rumsfeld’s “remarkable career” along with his “boundless energy, probing intellect and abiding commitment to serve his country.”

The Associated Press obituary described him as “ambitious, witty, energetic, engaging and capable of great personal warmth,” lamenting that his “reputation as a skilled bureaucrat and visionary of a modern U.S. military was unraveled by the long and costly Iraq war.”

What contemptible nonsense! One might as well say that Hitler’s reputation as a skilled military strategist was “unraveled by the long and costly” war against the Soviet Union.}

My idea of supporting the troops is surely different than a vast majority of the compliant natured. 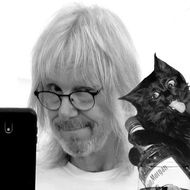 Along with Kissinger another who should have been retrospectively aborted for the good of humanity!

Nice to know that if there were a hell, one of Cheney's buddies is already there waiting for him now.

Rest In Piss. If there is a hell then I hope he's there with a room with a view. Piece of shit just like most of them.

Yes all true...but he was Jovial !

(SocioPaths run this country and it's religions and it's corporations: SAME)

Happy 4th of July to United Sociopaths of America (USA)