“The ruling ideas of each age have ever been the ideas of its ruling class.”

“The oppressed are allowed once every few years to decide which particular representatives of the oppressing class are to represent and repress them.”

“Political power, properly so called, is merely the organised power of one class for oppressing another.”

“Let the ruling classes tremble at a Communistic revolution. The proletarians have nothing to lose but their chains. They have a world to win. Workingmen of all countries unite!”

“Favourite motto … De omnibus dubitandum [Everything must be doubted].”

“History repeats itself, first as tragedy, second as farce.”

“Democracy is the road to socialism.” 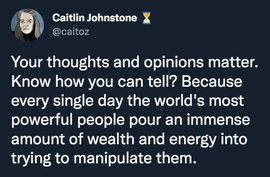