Religion what is it good for. Hypocrites. 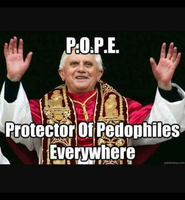 The primary attraction is based on animal instincts.

We evolved as animals living in groups. Groups provide a sense of security and protection. Good standign in a group insured the likelihood of attracting a mate and reproducing.

Religion provides a sense of community, which humans tend to be drawn to instinctually, because at one time, not so long ago in our evolutionary past, it meant survival.

Today religion still provides a sense of community, and a person's standing in that community still feels important to them for instinctual reasons, not rational reasons. We are a product of our evolutionary past and retain a lot of the instincts and behaviors from that past.

Humans are still evolving, and it may be that not all behaviors will prove beneficial for survival, but it will take a very long time for any noticeable changes to take place, but for people of that tiem period it wont' really be noticeable at all.

Humans forget almost all the time that they are animals and a product of their evolutionary past. They see modern humans as an end result, not an ongoing process of evolution.

Friggin Smeagol in his Sunday finest

(Religion: what is it good for?)… Absolutely Nothin

your title brought to mind

replace "war" with "religion" and it works.

This song is more to your point.

The Irish PM told the Pope this morning that it is time for action now, not just words.

It's amazing how long it has taken

church has finally been callled out

The pope neither desires nor is able to remit any penalties except those imposed by his own authority or that of the canons.

The pope cannot remit any guilt, except by declaring and showing that it has been remitted by God; or, to be sure, by remitting guilt in cases reserved to his judgment. If his right to grant remission in these cases were disregarded, the guilt would certainly remain unforgiven.

You can include a link to this post in your posts and comments by including the text q:163730
Agnostic does not evaluate or guarantee the accuracy of any content. Read full disclaimer.