Seems that the republicans Fascists can not control women,, so now they want to criminalize abortion as a felony!

An Oklahoma state legislator has just launched the latest extreme threat to abortion rights: a bill that would make abortion a felony homicide, punishable by LIFE in prison.

Worse yet, the bill has the potential to reach the Supreme Court — where a conservative majority completed by Brett Kavanaugh's confirmation will use this awful legislation to gut Roe v. Wade.

If passed, this law would be the most extreme anti-choice measure in the country to join other challenges to Roe now moving through the courts. We must do everything we can to stop these anti-choice measures before they become law or have a chance to be heard in the Supreme Court — our lives and fundamental freedoms are at stake.

The outrageous Oklahoma bill would define abortion as a felony homicide, with no exemptions for rape or incest, punishable by life in prison for the provider.2 The legislation also allows "representatives" — including male partners — to sue the woman and the doctor.3

Oklahoma is already one of the most anti-choice states in the country. There are only four clinics in the state, and they are all located in Tulsa and the Oklahoma City area, as far as 300 miles away from women in other parts of the state.4 The state has a 72-hour waiting period, forbids insurance coverage for abortion, and forces women to endure biased counseling designed to shame patients before they can access care.5

Now Oklahoma is edging closer to restricting abortion access, laying the groundwork to gut reproductive rights in the state. The author of this bill tried to introduce a similar measure and failed two years ago. But in November, Oklahoma elected a new governor who has vowed to stack the Oklahoma supreme court with anti-choice justices and promised "to sign every piece of [anti-choice] legislation that hits [his] desk."6

Before Brett Kavanaugh, we could count on the Supreme Court to uphold Roe and strike down laws like this.7 That is no longer our reality. 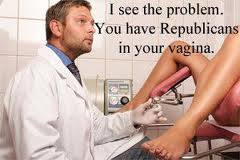 And welcome to how lawless government is. Federal law in this example being threatened. But when it comes to a state wanting to uphold Federal immigration law, gets knocked down, to a government that doesnt want to uphold the law.

Yup those who pick and choose what laws to obey/enforce have started this circus.

This does not even include the precedence of pot legalization. It is illegal by the Feds, but the states are legalizing. This abortion proposition is no different, than the pot legalization strategy. The playbook is the same.

If pot legalization is okay despite defying federal law, then one must also accept the possibility of criminalizing abortion by the same standard.

This has been their goal all along!!!

"Now"???!!!! Where have you been? This is what they have been working for Forever!

The Handmaid's tail is on the horizon.

That’s quite astonishing that such archaic ideology can even be considered for legislation. What next, transportation to Australia for stealing apples, or the ducking stool for the nagging wife!

even having a conservative court if they allow it to stand its the end of law.

The guy is an idiot. Abortion is legal so how can you be charged when it is not illegal. How did he get elected, oh yeah he's a republican scarecrow.

This is nsuseating. Is Canada still open? Might be time to expatriate.

You can include a link to this post in your posts and comments by including the text q:238257
Agnostic does not evaluate or guarantee the accuracy of any content. Read full disclaimer.