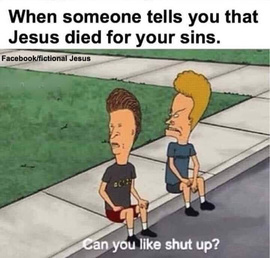 Which ?? Beavis or Butthead !!

Do you want to discuss the Bible?
Christians believe that Jesus died for their sins.

The popular Christian belief is that all men are sinners.
The wage of sin is death.
So all men are condemned to die for their sins.
But Christians believed that by dying in place of all men,
Jesus redeemed all men from the condemnation of sin.
Jesus ransomed all men from death, who accept the gift of grace from God.

Allow me to show you from the Scriptures.

Psalm 49:6-9 KJV
6They that trust in their wealth, and boast themselves in the multitude of their riches;
7None of them can by any means redeem his brother, nor give to God a ransom for him:
8(For the redemption of their soul is precious, and it ceaseth for ever

9That he should still live for ever, and not see corruption.
No man can redeem the soul of another. Not with riches nor with anything else.

Exodus 23:7 KJV
Keep thee far from a false matter; and the innocent and righteous slay thou not: for I will not justify the wicked.

Do not slay the innocent [Jesus] because God will not justify the wicked. [sinners]

Leviticus 27:29 Amp
No one doomed to death [under the claim of divine justice], who is to be completely destroyed from among men, shall be ransomed [from suffering the death penalty]; he shall surely be put to death.

No man condemned to death by God for his sins, can be ransomed or redeemed. He must be put to death.

Scripture cannot be broken. According to the OT, Jesus could not die for your sins.

I wrote this a few years ago to prove that the Christian doctrine that Jesus died for your sins is not supported by other Scriptures in the Bible.

Just a guess, but I bet you have never watched a beavis and butthead episode. This is a joke, not a debate.

IMO one has to be dumber than B&B to be a Christian. @mistymoon77

@nicknotes Well that's just a given.. and why they are saying to shut up...

You can include a link to this post in your posts and comments by including the text q:380975
Agnostic does not evaluate or guarantee the accuracy of any content. Read full disclaimer.