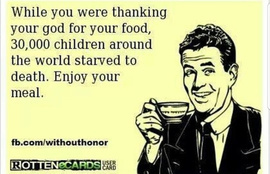 I wrote a poetic prayer to the non-existent flying spaghetti monster sky God, you can use it the next time praying with them Christian's at supper.

Pasta in the sky with meatballs for an eye.
How we wish they had a pizza pie.

Bread sticks with marinara for which to dip.
Who can not be sarcastic but gave a flip.

Condescending dressing over word salad so make.
What the hope from the child to take.

Spaghetti monster spaghetti monster in the sky
When will your atheist see, if they would get off their ass, quit complaining about God people for not doing anything and do something themselves, no child would have to die.

Deja Vu all over again

@Ellah You still have it posted three times. I think that's hysterical.

@Ellah You did it to show people like me? Okay. I thought you did it by accident as an honest mistake. People like me make good natured jokes. I don't claim to judge what kind of person you are other than hypersensitive.

You can include a link to this post in your posts and comments by including the text q:507435
Agnostic does not evaluate or guarantee the accuracy of any content. Read full disclaimer.