I here this bullshit too much. 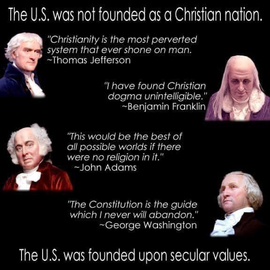 No, it was founded of Masonic lodge secret religion racist devil worshipper governmental terrorist European invadors following the religious "prophecy " of the biblical text raping this land from the original indigenous inhabitants calling them such as Mexicans, Indian and native American.

Establishment of the mark of the beast. Beast, is Metaphor for laws of government requiring identification (mark) for taxation, government control and capitalism slavery.

that no man might buy or sell, save he that had the mark or the name of the beast or the number of his name. Revelations 13:17

Indeed our founding fathers knew that in order to have freedom of religion you have to have freedom from religion. A lot of people if not most people and maybe even everybody came to this new land to escape persecution.

I think we know that, but sadly it is not the people here who need informing.

You can include a link to this post in your posts and comments by including the text q:559552
Agnostic does not evaluate or guarantee the accuracy of any content. Read full disclaimer.