Intolerance
How can we be different if we don't respect the beliefs of others? We can become just as bad as ISIS or the US Republican party.
Our beliefs don't have to match and we shouldn't enclave ourselves just because they don't. We atheist could become just as bad as them if we don't show tolerance and compassion.
We have our own struggles, no religious crutch to lean on, but we have too be strong and being strong is not to logically shatter other peoples beliefs.

Tolerance stops at the intersection of belief and personal moral systems and global accepted "norms" or rights issues.

We must respect people with different views. We must also stand firm if those beliefs do not benefit us all / are cruel or abusive. By that i don't mean benefit in a personal preference sense but a fundamental rights sense. Like persecution through willful or learned ignorance for example. You have to challenge that where you can.

Interestingly you talk about a religious "crutch". Isn't religion the injury and logic and reason the crutch that can allow you to drop the crippling injury known as delusional religious belief based on rumour and an old storybook ?

I would say the crutch is reason - religion is a festering old scabby puss filled wound and once you gain enough confidence in reason you no longer need the crutch, and not only wouldn't notice the crutch was ever there, but would hopefully forget you ever had one, being so much better without. Religion is a wound not a crutch in my opinion.

I don't get involved

I fine with leaving other people to believe what ever they want. As long as it doesn't hurt others or myself.

Nonsense. I respect your right to have beliefs but if they're stupid or harmful I will point out that fact. Letting idiots BELIEVE whatever stupidity they're into and giving said idiocy validity in the name of respect does no one any favors. I refuse to "respect" wilful ignorance or lunacy.

Yes, we do not have a religious crutch to lean on. But we stand more steadily on evidence, logic, science and reason.

I would not call it, "not to logically shatter other peoples beliefs". I would call it disabusing my friends of disillusionment.

If a someone from another part of the world feels it’s rightoeus to stone a person to death for infidelity, am I just supposed to respect that?

This idea that all beliefs are equal, and everyone is entitled to theirs without be challenged on it... its part of the problem we find ourselves in.

Dear Wally, I did specify 'as long as it doesn't harm others'. Anti-vexxers do as do peadophiles. They are despicable.
'Flat earthers, chem trail believers - well they just took too many drugs when they where young or skipped science class. Maybe they just want to believe in something no matter what it is.

@Sticks48 Very Good, but the other side is doing it all the time and repeatedly. Open your eyes! Think for yourself. Not only are they intolerant, they also lie about it.

@norealgod l always think for myself, and l never tolerate ignorance, which the right swims in.

@Sticks48 We all swim in various depths of ignorance, But the left is in deeper and by a lot. The so called elite know better so they simply lie, the followers believe it out of very deep ignorance

@norealgod Sorry cowboy, but we know registered Republicans are less educated than registered Democcrats. I know conservatives never let facts get in there way, but this is a fact.

Thanks for this. I heard a quote this morning: “Outrage is moral junk food. Not nourishing but feels good in the moment.”

I relate to how easy it is to shame, shun or eviscerate others and their beliefs. Constructive dialogue is harder bc it requires encounter and presence and empathy.

I lived in Charlottesville during the Nazi rally where a protestor was hit and killed. The prevailing wisdom there since has been there’s no tolerance for hate speech. I agree wholeheartedly. And Even that refusal to condone can be packaged in love and empathy. As you point out, it must be, or we become the hate speech. 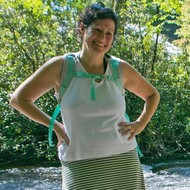 Hate speech, almost any speech is protected by the constitution. You are espousing intolerance in the way you block other peoples' speech. You hate the Nazis don't you? I do too, but I let them speak in empty streets and you are violently opposing. You magnify their voice by this stupid behavior, It is wisest to simply ignore them.

@norealgod hi buddy. All I said was that I personally do not tolerate hate speech. I didn’t violently oppose anything that weekend in August. I chose to go paddleboarding that day. So, point sorta proved - you got outraged toward me and it accomplished nothing.

Their speech is protected, yes. And when some took their vitriol into our public housing to intimidate residents, I admire those counterpotestors who didn’t tolerate that bs and ran them back out.

Staying on the sidelines is a privilege of the untargeted.

My point was it can be done without violence or shouting.

Spot on. Agreeing to disagree is the most civilized thing that people can do. Now, if we can just convince everyone else.

You can include a link to this post in your posts and comments by including the text q:69685
Agnostic does not evaluate or guarantee the accuracy of any content. Read full disclaimer.