The "Birth" Of Jesus. 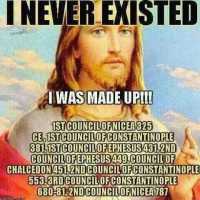 This is the worst meme i have yet to see. Jesus existed for at least 350 years prior to theCouncil of Nicea at least as myth. This seems to suggest he was made up right then in 381 C.E.

There is no mention anywhere about Jesus in the first century a,d.Dr.Bart Ehnman,Prof.Religious Studies North Carolina University.

@Coldo He was only speaking of out side sources. The genuine letters of paul were written in that period. He did not necessarily speak of an actual historical figure, But at the very least the myth did in fact exist. Dr. Ehrman does not make the claim that The jesus myth did not exist. In fact he wrote a book about how he believes that Jesus was an actual historical figure. Did Jesus Exist?: The Historical Argument for Jesus of Nazareth
Did Jesus Exist

I am not sure what citing these councils says one way or the other about whether the Jesus mythos was based on a real individual or not. I happen to think the mythos was made up out of whole cloth (in some ways, well before the Councils), but it really doesn't matter because the fabulist mythos isn't credible to begin with.

The councils wrote,edited ,the bible till the leaders of the various religions agreed on the story.They then became the new religions leaders.Constine was the Roman Emperor that led the councila

@Coldo Sort of, There really wasn't as much done at the counsel as it is given credit for. The main thing they did was set the stage to centralize the religion. The Biblical canon as we know it today already existed they only reviewed other text and simply threw them out which was of no consiquence anyway. They did "authorize" a canon popular still today.

Easy enough for people with that name to have lived. Not at all easy for the conditions or events surrounding Jesus to have happened. (And I recommend reading Nailed to people examining historical Jesus.)

But I do always wish the religion had centered on Shamgar...

The only Roman census historically recorded at anywhere near the time the gospels of Luke and Matthew is The Census of Quirinius of 6 CE granted this was in the incumbency of Augustus, but was 10 years after the Death of Herod the Great and was only carried out in Judea with no compulsion for anyone to return to their place of birth.
Even if as some have suggested it was not actually a census but was the oath of allegiance ordered by Augustus in 2 BCE of all subjects of the Roman empire to celebrate his silver jubilee, that still places the event 2 years after the death of Herod and in February, not December and simply required a record of the place of birth of th men (not the women) not for them to actually travel there. There is also of course the fact that even if Joseph did have to travel, he was a citizen of Syria, being Galilean, and Bethlehem is in Judah in effect having him emigrate to take the oath

One of the most ridiculous Christmas stories is found at Luke Chapter 2.
1And it came to pass in those days, that there went out a decree from
Caesar Augustus that all the world should be taxed.
3And all went to be taxed, every one into his own city.

So you can see that according to Luke, everyone in the world, or at least
everyone in the Roman Empire, was to obey the decree of Caesar Augustus,
and return to the city of his birth in order to be taxed.

Think about how crazy this would be. Millions of people would be traveling
many miles, perhaps some traveling hundreds or even a thousand miles,
to get "home" during the month of December, the month with the fewest
hours of daylight and cold weather. Then after registering for the tax, they
would have to go back to where they now resided during the month of
January the coldest month of the year.

The people would have had to walk, or ride horses or donkeys or ride
in wagons. Taking a ship to go home would have been dangerous
as it says at Acts 27:9 , because December is after the "fast" or Day
of Atonement, which is usually in October."""9Now when much time
was spent, and when sailing was now dangerous, because the fast
was now already past, Paul admonished them,""" Acts 27:9

We live in a modern world with planes, trains, and automobiles,
hotels and motels, fast food restaurants and electricity. We could
do it. But imagine the primitive conditions 2000 years ago and
you can see how ridiculous this idea is.

Does this all seem like a ridiculous way to get Joseph and Mary to Bethlehem for Jesus' birth?

Can We Have Confidence In the Gospels When They Contain Ridiculous Stories?

Nazareth was a rocky burial ground for over 100 yrs, before the the "Birth" of Jesus.And almost 100 after!

@Coldo It was and is also at the bottom of a valley, not on a cliff edge as stated in the gospel of Luke 4:29

@Coldo Right! And there was no record of Nazareth till a good century after Jesus died. It may have existed but no way was it big enough Jesus could have said "of Nazareth" and get the reaction that they were knew it and were impressed.

You can include a link to this post in your posts and comments by including the text q:81209
Agnostic does not evaluate or guarantee the accuracy of any content. Read full disclaimer.