I've read some pretty harsh anti-Muslim posts here. I'm not sure that Islam is any worse than other religions when taken to extremes. Westboro Baptist is horrid. It is not acceptable that radical Muslims are running much of the world, particularly the oppression of women. Luckily Westboro or Hasidics are not running countries. It doesn't get much worse than Zionists in Israel, though.

Any fundamentalist sect is dangerous, IMO. All beliefs have their moderates and their extremists -- it's recognizing those differences, not the religions themselves, where I feel it matters. Moderates are for the most part open and accepting to other belief systems; extremists believe theirs is the right way and the only way.

Having the Wahabis in charge of Mecca (House of Saud is Wahabist AFAIK) is like putting the Westboro Baptists in charge of the Vatican.
Which also accounts for why a lot of Islamic heritage is being destroyed.

I don't think bashing anyone is helpful (except Trump) I happen to live down the street from Westboro. You should see the front of their compound. They literally have huge signs, but then we have the Rainbow house across the street. 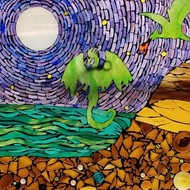 Zionism is not a religion, it is a political ideology, an extremely nationalist ideology, that holds to a doctrine of a chosen people being superior in the eyes of god (sorry g-d) to all others.

I haven't seen any lately...i always reply with harsh criticism of any such nasty posts, As Silence is acquiescence!
Just called an idiot on his "jewish" remark...he deleted the post, but then replied As If it were still there.......damn racism makes ya Stupid, lol!

I don't think Islamic fundamentalism is materially different than Christian fundamentalism (for example). What makes it especially problematic is not inherent in the religion so much as that the combination of Islamic fundamentalism and widespread hopelessness and poverty in nations where it is prevalent (both as cause and effect) ... combined with sheer numbers (Islam will in the coming years surpass Christianity on a worldwide basis).

Agreed. There are radicals in any group of people, including atheists. Ideology varies and personalities vary.

As for the Zionists, it has ceased to amaze me that specific religious groups do not seem to remember the lessons of their past. For centuries, Christians have fed non-Christians to the lions. Some Jews have, apparently, not internalized any of the lessons about prejudice and the persecution of WW II and other European pogroms. Of course, the Jews were not kind to the people who had settled in "their" land while they were supposedly in Egypt and had their subsequent supposed exodus. Go figure.

You can include a link to this post in your posts and comments by including the text q:91463
Agnostic does not evaluate or guarantee the accuracy of any content. Read full disclaimer.