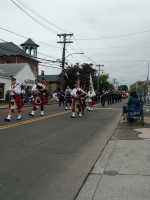 I think we could honor our service people by not fighting useless wars.

I attended a Memorial Day service today in Philadelphia and a couple of things struck me. For perspective, I am a Vietnam Era Veteran (though I was never in Vietnam). At age 20, I accompanied a mission to Hong Kong to pick up the remains of four downed American pilots, specifically, their cremated remains. (If you want the detail PM me.) I held the remains box of one of the men in my lap, until we'd taken off. We then placed the four sets of remains ceremoniously in coffins and draped them with flags. In the most powerful way possible it made real that war isn't about honor, glory, and other thoughts the machine cranks up to get people in line. It is about death. Killing. Force. So what struck me today?

-The unhealthy mixture of god (I purposely use a small g) and country With the exception of the early part of the war in Afghanistan, since WWII the soldiers sent to fight and die are not defending our freedom. The are imposing American hegemony. It is not god-ordained. The hero-ization of these brave citizens deaths serve the purpose of those in power. Read Chomsky's essay on Manufacturing Consent. This is part of it. And please, this is in no way disrespecting the sacrifice of those who gave their lives. But for what? Is making the world safe for Enron something you'd sacrifice your child for? Me neither.

-Since the end of WWII the actions of the American government, either directly of through proxies, have led to the death of 5M+ people. The Vietnamese soldier fighting for his country didn't die attacking South Philly. The government sent troops there. He was defending his country, heroically, against far superior forces. The list is long. They too-and the almost too many to count civilians-deserve honor as well. Nary a mention.

Bag pipes work on me...its like im trying to remember something from my past.

The pipes the pipes are calling. They Shall Be Remembered.

You can include a link to this post in your posts and comments by including the text q:92815
Agnostic does not evaluate or guarantee the accuracy of any content. Read full disclaimer.