"I don't care what you believe if it does no harm."

First, I self identify as an apatheist. I know gods I've created exist on paper as does all those of ancient oracles and fellow fantasists. How they exist beyond being written is a source of conjecture. Not knowing makes me agnostic...I do not claim knowledge.

As far as what I claim no knowledge of I don't care. In creating my own fantasy pantheons, I've studied a lot of religion, mythology, paganism, spirituality,... many god theories I have no concern of how or to what degree they exist beyond print...

...where said beliefs affect others. Here we are confronted by some terrible gods indeed! Throughout the history of humankind the religions in power have created echelons of individual, civil, political and international injustices.

Today, these threaten the very existence of our planet's ability to sustain life. Our society, with religious substantiation of rampant pollution, global warming denial, profit over people,... these are issues which do concern me.

Still, I will not self identify as an antitheist. The title itself carries a connotation of bitterness exclusively toward the religious and, to my experience, I've found this to be too often true.

Also there is the common misconception antitheists are all militant, all part of far left extremist groups. There is no evidence of this to my knowledge but of what need is evidence to a gnostic?

I have no issue with what anyone believes or what they think they know. However I will when their actions as a result of these beliefs adversely affect others.

Neil deGrasse Tyson says something similar about all of the baggage that comes along with being labeled as an atheist. And, I myself have heard a lot of predjudicial assumptions when saying that I lean Libertarian. I doubt if the people that would jump to the conclusion that you are a militant leftest if you call yourself an antitheist will understand the nuance of calling yourself an apatheist. They don't want to understand. They want to put you into a box so they can take away your voice.

I still feel "apatheist" is a closer description. Antitheist isn't really a good fit. I'm against the damages caused by religions, not necessarily the religions, or religious, themselves.

@DangerDave I agree with not being against the religious, but the organizations have done innumerable harm, most often to the congregants themselves. One example would be the catholics or mormons covering up pedophilia and sexual abuse.

I blame Jonathan Edwards because he was a Hegelian.

Got me. I've never heard of him. I may research him at some time.

@DangerDave A proponent of the Absolute, dumber-down and moraliser. If you like philosophy then critique that side of him because it needs it (bad logic). Christians too often pick up on half-truths. It has reached the pitch that they don't know what they are talking about or why. Few believers are called to spread a message by verbal initiative. The relative is far less harmful than supposed, as long as it in turn isn't negated and weaponised by controllers. Christians who don't look after their own aren't going to attract interest for starters. "My god is meaner than your god."

If there is an exception to your rule, can you still claim the rule your rule? As a true apatheist, you simply would remain unconcerned. Yet, you clearly state the line where your concern begins. Not trying to be picky, and am quite apathetic myself about caring to fit in one box or another, so certainly not trying to push you into one, especially with all the incongruency among perceptions of definitions. My thoughts are complex, and I have yet to find a box I fully fit into. The closest I have come is Agnostic, because, really, do any of us know anything within the scope of what is to be known? I am happy sitting in the I don't know and that's okay fcr now box, but I am ever open to learning as new information is available. However, the one thing I am sure of is that any discovered truths will not contain some anamorphic God that sits in the sky and reigns down judgment on his subjects, and my tolerance ends where the use of religion to oppress, encourage hate or rule by fear is engaged. 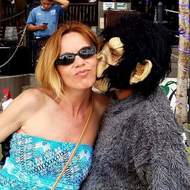 I am apatheist to religion in general but I applied "antitheist" to my feelings about the damages created by religions, though I don't claim the title. This should all be clear in the article, which I presented as a personal opinion.

By Admin Oh my god!Can an atheist be a proud Secular Christian?