Can you say "inquisition"? It could easily head that way.

Who is going to pay for it? It ain't taxpayers. ACLU will take them to court. Saudi Arabia has a police task force who sole mission is to force everyone in doors when the call for prayers occurs, which is five times a day. 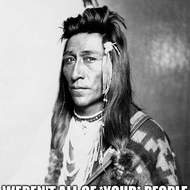 This would be a terrifying precedent, if it becomes law.

For a start, any church that feels they need added security can hire security guards. Alabama law allows anyone with a permit to carry a firearm on church grounds. Security guards would have added training (hopefully) and know how to use them as well as or better than the average permit holder. They can make a citizen's arrest in the event of any trouble arising, and call law enforcement. For that matter, any citizen can make a citizen's arrest. They can even use reasonable force to restrain someone reasonably suspected of committing a felony. Also, it's Alabama. I guarantee that 75% of the men and at least 25% of the women in the pews are armed and waiting for ISIS, Al-Qaeda, the Taliban, and the Rainbow-Push Coalition to stage a joint attack during the morning offering.

What a security guard can't do is conduct an investigation or collect evidence. That would be the only reason to have a private police force: to keep criminal investigations internal and out of the public eye.

Add to this the fact that real law enforcement officers go through hundreds of hours of training along with yearly update training. What training would The Church Police have? If they're not answerable to the civil authority, then who reviews the incidents when they shoot a "violent attacker" on church grounds? Who independently reviews their findings when they clear a pastor of child abuse charges or embezzlement?

They might be useful in a Monty Python sketch, though.
"I'll call the police." "Shouldn't you call the church?" "Call the Church Police!"

And I hope you donate to FFRF !

I guess they wanted to copy the New York Jews.

I wonder will they go by the Mosaic Law too.

You can include a link to this post in your posts and comments by including the text q:330292
Agnostic does not evaluate or guarantee the accuracy of any content. Read full disclaimer.