I have a couple items I can share. For the Captain. people murdered by gun. 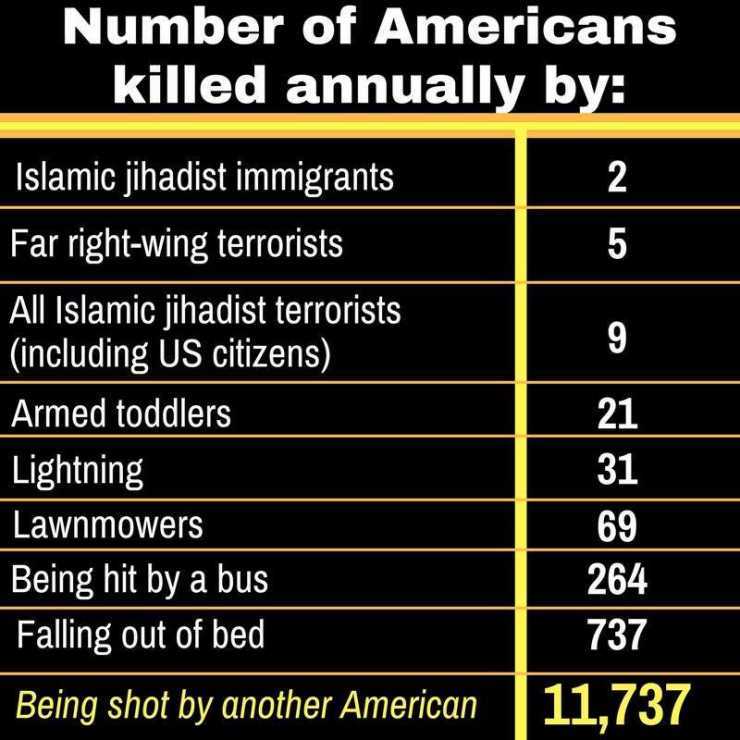 It is just a table of the number of Americans killed annually and how. A comparison to Americans who fear immigrants probably more than anything. May I suggest to admin they remove this all if they wish. The only stat that one guy would have been interested in at all. How we got from here to the NRA and mass shootings is way off center.

I have seen the rates of gun stats for other countries mass murders. The USA is the GREATEST at mass murders.

Why are the NRA & guns rights activists so opposed to any restrictions on gun purchasing/types of guns (e.g., assault rifles)?
54 Answers
Josh DiGiorgio
Josh DiGiorgio, American.
Answered Jun 15 2016 · Featured on Newsweek · Author has 1.2k answers and 1.3m answer views
Originally Answered: Why is the NRA so dug in in its opposition to the most minor of gun purchasing restrictions? Is this rational?
The NRA operates under the assumption that the following idiom is correct in regard to gun control legislation:

Give an inch, take a mile.

They also represent a large body of the American population (44%) who feel that current gun laws are either adequate or too strict.[1] Additionally, the NRA represents the business interests of firearms manufacturers which are under constant legal and financial threat for manufacturing and selling their products to distributors via new regulations and civil suits.

So, why does the NRA oppose even the most minor of restrictions?

Well, define minor. Some of the most recently proposed restrictions include:

“Hold(ing) irresponsible dealers and manufacturers accountable.”[2]
Like in Runaway Jury? There’s already legal precedence for gun manufacturers to be held civilly accountable if they create a faulty product. [3] But that’s not what this is about. This is about suing gun manufacturers out of business and punishing them for producing products that customers used, without the company’s knowledge or endorsement, to commit a criminal act.
Enacting “legislation to extend and reinstate the assault weapons ban.”[4]
To many gun enthusiasts, this is not a minor restriction. Assault weapons, by far, are not responsible for the majority of gun crime in America. Instead, they look scary and they’re an easy target for gun control proponents. Assault weapons bans are little more than virtue signaling given the lack of frequency in which they are used in the commission of violent, gun crime.
“Crack(ing) down on gun stores that flood our communities with illegal guns.”[5]
This one goes back to a longstanding myth that legitimate gun shops are somehow running a huge black market for illegal gun purchases. There’s no evidence that supports that claim.
Most guns used in crime are obtained either by theft (burglary) or private transaction.[6] [7] It should be noted that, often, these private transactions are not protected by law because they involve criminals selling guns to other criminals with the knowledge that the product they sell is going to be used illegally. The reason for this discrepancy is rather logical. Guns purchased legally through a dealer have individual serial numbers that are attached to the purchaser. Therefore, they’re rather easily traceable which is a trait that criminals try to to avoid.
“Mak(ing) straw purchasing a federal crime.”[8]
Well, that’s already a crime. Reference 18 U.S. Code § 922 - Unlawful acts. Also reference Abramski v. United States for the Supreme Court’s affirmation of this law.
There exists a growing number of Americans, especially those in high places, who are increasingly inclined to the European school of thinking in which firearm ownership is generally prohibited/strictly regulated for all citizens and reserved for law enforcement and military entities. These people conceal themselves under the guise of “reasonable” or “common sense” gun law reform organizations. Each legislative or judicial victory brings them a little bit closer to their goal. In gun control strongholds like California, they’ve done well for themselves. But, let’s face a simple truth here. Gun violence in America is not going to end until firearm possession and purchase are completely prohibited. Being a proponent of gun rights requires the NRA and its members to accept that the price for this freedom is that, every year, some people are going to die for it.

The reason that the NRA generally opposes restrictions that are marketed as being “minor” is because they understand the end game of the legislative and judicial fight over guns in America. The end game is to prohibit firearm ownership or water it down so much that it is, in essence, prohibited.

[6] “What Percentage Of Crimes Committed With Illegal And Legal Guns”

You can read this, cut it, and give a link. This is the NRA and yes I consider the NRA to be run by the MOB! Assualt weapons belong in the hands of the military and swat teams!

The statistics on the chart are selected to give the impression that guns kill more Americans than other causes. What the chart does not list are the 250,000 deaths per annum from Medical mistakes, 64,000 per annum deaths from overdoes, etc. Death by firearm is not in the top ten causes in the U.S., despite the demogogury of the anti-gun crowds would have you belive. The list is disingenuious to say the least...nevertheless, they did not stoop to comparing shooting deaths to snake bites at least.

If you anti-gun people really want to impact the rate of gun murders, take the guns away from all Black males between the ages of 20-24.
[dailymail.co.uk]

I have never looked it up, have heard that the most death occurs in the bathroom.

Where is the converse? [snopes.com]

@azzow2 You expect me to believe this over a meme?

@TheInterlooper I be interested in anything you can find.

@BettyColeman Is like taking birth control pills to prevent STD's

@azzow2 I am 70 sir and have been a virgin the last 20 years. I have pretty damn good qualifications. And yes, Good SEX is outstanding and I know the difference!

@TheInterlooper I have no expectations from or for you. this is a believe as you wish place as I understand. So, you go for it!

Pretty amazing! Math don't lie. Thanks for posting that.

Does the last number count only murders? No source to check against.

sorry, yes murders, Now that I think about it, I believe it was people killed with guns. IF it is a child, who is the murderer? The parents for negligence? Those kids mowed down in the schools, you call that MURDER? Being killed by an assault rifle, should not be allowed to happened. Japan had I think 1 person killed by a gun. They have very easy to enforce laws and you can have a gun if you are qualified. If you want to kill 150 people a minute/however many rounds, join the army.

@BettyColeman If the government takes away gun rights the problem will just get worse. The out break of backyard and black market guns is just going to increase.

@azzow2 WHAT!!!!! Do you mean to say the prohibition of alcohol and drugs not only did not fix those problems but spawned a whole industry around the Black Market for alcohol and drugs?! Who would have thunk it?

If you look at that graph and read it all it includes things like lawnmowers. I don't know any mass murders or murders by lawnmowers, but people get all whacked up and do all kinds of things. That chart give killings for other areas than just guns.

You can include a link to this post in your posts and comments by including the text q:42603
Agnostic does not evaluate or guarantee the accuracy of any content. Read full disclaimer.