With many networks cutting live feed off Trump because he was dribbling shit ie giving false and misleading information, do you think a new precedent has occurred?
Are our media now going to grow up and start questioning official narratives a little more? Less entertainment and more journalistic reporting of news?

My guess is that some journalists will feel they've learned something about what the media isn't doing well and apply that knowledge. So, yes. I've heard two great conversations about that topic from big names so it isn't being missed. I mostly watch PBS for hard news and MSNBC for entertaining discussions. PBS is about as fair as humans can become. NPR often breaks news for me if I'm away from computer. They're the second most reliable. I love many others, like Vox, Atlantic, Bill Moyers, to name a few. My point is that there's a lot of open competition in media because of its low rep so many are going to fill that need. Others will copy it, when successful, and that will become a new common. This all happened because of cable, you know. News wasn't like this before Turner sold his network so the new common does change. Ratings will become far more knowable now that digital recording of eyes is precise and the market really open to everyone. The next Limbough might not have found their moment yet but can get on the air. Generational changes become a tidal wave with every third or fourth generation and society makes a gigantic leap forward when they have political clout. That's where we are but just barely. 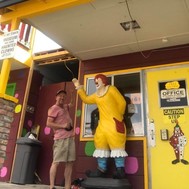 Our ex PM in Australia, Kevin Rudd, is pushing into an enquiry aimed at media ownership, targeting Murdock press mainly. Sky news here is still promoting Trump conspiracy theories re election fraud. Something needs to be done about Murdock, his own son left the organisation and not liked in UK either.

@powder Sounds like Rudd might have begun doing just such a thing. Battle of Titans. This happens from time to time so will help with our efforts if Murdoch is neutralized with other business.

It is way past time for the media to decide what is news, not demagogic politicians.

So long as we're not talking about Faux Noose

Of course they will -- a Democrat will be taking office.

Not yet. This is still not over.

You can include a link to this post in your posts and comments by including the text q:551867
Agnostic does not evaluate or guarantee the accuracy of any content. Read full disclaimer.