We rely on members to let us know when posts contain content that violiate the community guidelines. The most common reason that content gets flagged is that it contains dehumanizing or trolling/baiting text. Getting too many flagged posts will result in account termination.
Visit Group Join Group
1 10

LINK The complicated truth about a cat’s purr

Our cats may purr when we pet and tickle them, but it’s a much more complicated form of communication than we've assumed.

We think we know what a cat’s purr means.

It is arguably the most recognisable sign of animal contentment: a pleasurable rasp that erupts whenever a cat is tickled or petted, the soundtrack to countless sessions sprawled on an owner’s lap.

But that’s not quite the full story. There is a lot more going on with the cat’s purr than you might reasonably expect.

Even the ‘how’ was long a subject of debate. Some thought it was linked to blood flowing to the inferior vena cava, a vein that carries deoxygenated blood to the right side of the heart. But with more research it seemed likelier that the noise came from the muscles within the cat’s larynx. As they move, they dilate and constrict the glottis – the part of the larynx that surrounds the vocal chords – and the air vibrates every time the cat breathes in or out. The result? A purr.

Even though science is now fairly sure this is the process, there’s no definitive answer as to what triggers the response. The biggest clue is a neural oscillator deep within the cat’s brain, one that otherwise has no clear purpose.

But if that neural oscillator is triggered, is it just when a cat is happy?

Sometimes. But only sometimes.

Marjan Debevere is a cat shelter photographer in London who is currently studying for a degree in feline psychology. She is also the owner of four cats – Clive, Hula, Luigi and Archie – who are something of an Instagram sensation (33,000-odd followers and counting, Instagram fans).

Part of the mystery around the purr is that we often only notice cats purring “when we tickle them in places that they like to be tickled”, says Debevere. Yet they also purr when we’re not around, and the extent of that purring varies between individuals. “All cats are different, some never purr and some will purr constantly,” she says. She draws the comparison between her cat Luigi – a stray who followed someone in to their office and was subsequently taken to a shelter – and Archie, who “moved in from next door” and became part of the family. Luigi purrs little, and Archie a lot.

“I’ve photographed more than 3,000 cats so far [at shelters] and no two are the same,” Debevere says. “I’ve witnessed a lot of cats purring when they’re dying, and when they’re being put to sleep. The vet will say something like ‘They were purring right up until the end’, and people assume they’re happy when they’re purring. That’s just not always the case.”

The study of cats’ behaviour and communication has lagged behind that of dogs, which are usually more willing participants, especially if there is a reward of food involved. But in recent years more light has been shed on the purr.

"We’re just beginning to understand it and there are more unanswered questions than answered," says Gary Weitzman, a veterinarian and CEO of the San Diego Humane Society. "While the purr does generally represent contentment for cats, it can also express nervousness, fear and stress. Fortunately, more often it’s an indicator of the former.

Cats begin purring when they are a few days old, which helps their mothers locate them for feeding time. This may persist with some adult cats who purr as they feed – or who purr beforehand as they try and convince a human it’s dinner time. Some will purr loudly when they are cautiously investigating new environments (my own cat purrs loudest when it’s exploring the back of the wardrobe). Cats may also purr after they’ve been startled, or after stressful episodes like being chased by a dog.

The more science has delved into the purr, the more it seems to have uncovered. "Researchers have recorded 'ordinary purrs' and purrs that were soliciting food from their owners," says Celia Haddon, an author and cat behavioural expert.

This is where we address seemingly simple questions… that have very interesting scientific answers. After all, as science has taught us again and again, there’s no such thing as a stupid question.

"Even non-cat owners could tell the difference. Inside the ordinary low purr was a higher frequency cry, somewhat like a meow.

"This particular sound is rather like the isolation cry of kittens or the human baby distress cry. We humans are naturally sensitive to the baby cry, so we respond also to the cry within the purr."

Sam Watson, the scientific officer at the UK’s animal charity the RSPCA, says there is still little understanding of how cats purr amongst each other in the wild, though it’s apparent that they will purr as they groom each other. “There could be one for ‘I want that’, another for ‘Let’s share resources’. There are lots of things like that we know so little about.

“Feline communication is absolutely overlooked, and it deserves a lot more attention and study than it’s given today.”

One hypothesis is that the purr is a powerful healing action. It’s thought that the vibrations from the activity are physically rejuvenating – a way for the cat to ‘heal’ itself after stress. The frequency of those vibrations – which range from 20Hz up to 150Hz – is thought to promote bone growth, as bones harden in response to the pressure. Other frequencies may do something similar to tissue.

“Purrs at a frequency of 25-100Hz correspond with established healing frequencies in therapeutic medicine for humans," Weitzman says. "Bone responds to 25-50Hz and skin and soft tissues to around 100Hz according to researchers."

This is why we see cats purring in apparent contentment while dozing. In reality, it's a form of self-repair. Cats may have adapted their normal behaviour – which now involves spending a lot of the day resting – as a way of avoiding injury through over-exertion. The purr has developed as a low-energy way to keep bones and tissues in good condition while they rest.

And the purr may not just be of benefit to the cats themselves. Petting a cat has long been seen as a form of stress relief – cat ownership could cut the risk of stroke or heart disease by as much one-third. Those same frequencies cats purr at might also be doing good to us as well.

Haddon agrees. “If it is winding round your feet, looking up at you, glancing towards the food cupboard or the fridge, you cannot miss the signs together with the loud purring that say it wants its food – now!

“In the morning loud purring can be used, together with human face patting or rubbing, to wake up a human and thus get breakfast. Most of us feed the cat before ourselves, which shows how effective their communication is.”

Ultimately, the quest to define the meaning of a purr may benefit from getting to know cats’ body language better – from the periscope tail of a friendly cat in sociable mood to the wide eyes and bent-back whiskers of a cat in fight mode. With this deeper knowledge, the bond between cat and owner can only grow.

Very interesting article. My cat Leo, who I've had nearly 3 years, never purred for the first 6 months I had him - I'm guessing since I did not not keep track of the time period. Now he purrs as much as my other two. From the article I think it was probably because he was still getting used to his new home and 2 other strange cats. He was a stray they found wandering a town that had been damaged by a tornado, and no one claimed him. He still gets terrified whenever there is a thunderstorm. 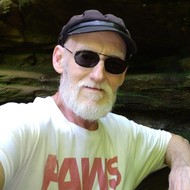 Posted by AppleriverKitty has something on his mind….

Posted by snytiger6The food is good but ...

Posted by KilltheskyfairyIs this affection or aggression?

Posted by KynleiYou did good, kid.

Posted by KilltheskyfairyPurrfect in pink!

Posted by KynleiShe just really likes hanging out with her human 😊

Posted by of-the-mountainThis is my Bobbysocks!!! She was with me for just over four years!!! She past over two months ago now of sudden Chronic kidney failure!!! She was the Lady of the house, she is sure missed!!!...

Posted by of-the-mountainThis is my Bobbysocks!!! She was with me for just over four years!!! She past over two months ago now of sudden Chronic kidney failure!!! She was the Lady of the house, she is sure missed!!!...