After President Biden called him out for "neanderthal thinking” for suddenly rescinding all mask requirements in the middle of a deadly pandemic, Texas Governor Greg Abbott and many GOP leaders say that President Biden is not showing “the spirit of friendship and cooperation” that Republicans have shown these past four years under President Trump.

In fact, during a recent interview with Fox and Friends, Gov. Abbott complained that ever since Joe Biden referred to his thinking as being “neanderthal,” the state is now being overrun by anthropologists and paleontologists, hoping to finally gain more insight into the thinking of a species long considered extinct.

To illustrate his point, Gov. Abbott pointed to his recent press conference over in Luckenbach, where rather than being asked policy questions, he instead was peppered with inquiries about making stone tools and mastodon hunting techniques - questions which he called “completely ridiculous, given the fact that the Earth is only 6000 years old.”

Meanwhile, Democrats say they’re in full agreement with President Biden’s “neanderthal comments.” To demonstrate this, they point to Gov. Abbott’s mismanagement of the killer winter storm that recently devastated Texas, claiming this clearly proves that Abbott secretly wants to bring back the Ice Age.

Now, I don’t know about all that, but what I do know is - if they don’t get around to upgrading that electrical grid of theirs pretty damn soon, conditions in Texas may become closer to that of the Ice Age faster than anyone could have ever imagined. 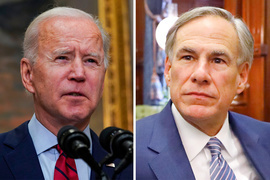 Then Abbott should shut up and grow up

Well WTF, (What The Fuzzynavels), Greg had a plan to distract them thar Texans with a bright shinny freedom from the mask un guv'ment overreach and ta get them ta ferget their power and water woes. Then long comes that, (yuck), Democrat cheater Joe say'en we is Neanderthals fer taken ur masks off during a pandemic. Now that ain't no spirit of friendship like in the old days when Don didn't wear no mask.

Abbott needs to grow up....

Why Joe had to insult Neanderthals by equating them with Rethugs is beyond me.

As a person whose DNA contains more Neanderthal than 80% of the population, I find this biased, offensive and racist. As an atheist person with a sense of humor, it’s pretty funny and apropos of Texas sky daddy beliefs.