We rely on members to let us know when posts contain content that violiate the community guidelines. The most common reason that content gets flagged is that it contains dehumanizing or trolling/baiting text. Getting too many flagged posts will result in account termination.
Visit Group Join Group
14 15

I'm not certain who's most deplorable. The racist asshole doing these things or the officials who refuse to use the laws that do indeed exist to combat things of this nature.

Where does this "man" work? Contact his employer and explain the situation to them.

Have a number of people contact the employer and let them know that if they can't get him to stop they need to fire him or be picketed and boycotted.

It's Bible belt Tennessee ,racism is the norm, maybe a peace warrant

Where are the other neighbors? Why aren't they playing offensive music at this person in support of the black family? I would do anything to encourage this heinous person to leave.

It took other military vets and neighbors to get some reprieve.

The police are claiming they're powerless.

The Black family should play Battling Banjos whenever the White family leaves or comes home..

I was thinking the black family should play Min Louis Farrakhan's "white devil" rhetoric. Too much?
(of course I say that in jest)

As utterly shitty and awful what this person is doing to his neighbors... technically he isn't breaking any laws except maybe a noise ordinance. Because what he is doing is rather vaguely insulting and rude it isn't really illegal especially since it isn't directed at a specific person.

You know damn well if a family of Black people were harassing a White family in a similar fashion this "law enforcement" officer would have taken action against the Black family. I grew up with separate bathrooms and water fountains in some places and worse. I am so tired of this shit, especially from these so called public servants and protectors of the public.

The victims need a good lawyer to sue those Officials! Set her & her family up for life, no doubt!

It might be possible to get the power company to turn off the electricity to this house. Or it might be possible to turn off the electricity without the power company. Are meter boxes outside the house. One would have to figure out a way to do this without being on their property or getting caught as it might be a crime. Also the people might be large enough assholes to have and use guns to defend themselves. If the power box is outside the house and it is read by using a signal reader then the signal can be hacked and the electricity could be turned on and off at will, Be sure the signal you decide to use cannot be tranced. Oh, I have not written this as it may be used to determine that I am creating a crime by giving out the information.

Think we should form a posse and go there and confront the cretins. Dirty Harry 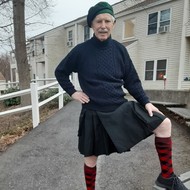 That's exactly what happened. Protesters showed up (mainly ex and/or current military. It didn't take long before the neighbor ticked his tail and stopped. This is a combat vet family.)

This is the most infuriating thing I've read in a long time! (Well...other than politics, of course.) I wonder if there's a local ACLU chapter which could help steer her to appropriate legal action?

Harassment is a crime.

Not in the eyes of the police there. They still, as of today, claim they're powerless and the harrasser is protected by the First Amendment.

Which is basically crap. Noise ordinenses, hate crimes, stalking, etc., would all work. No one gives a damn who's in a position of authority.

(Good news though. Protesters from across the nation showed up. Most military because this is a combat vet family. At the moment, it's quiet.)

Is a part of this story being omitted?

Nope. (However, after this story went viral, protesters showed up from across the country and the harassment, at least for the moment, has stopped. How long that will last is anyone's guest.)

The turnout was, in part, because the family being harassed are former military. The calvary took to the streets on their behalf.

harassment is not a crime? Seriously?