We rely on members to let us know when posts contain content that violiate the community guidelines. The most common reason that content gets flagged is that it contains dehumanizing or trolling/baiting text. Getting too many flagged posts will result in account termination.
9 9 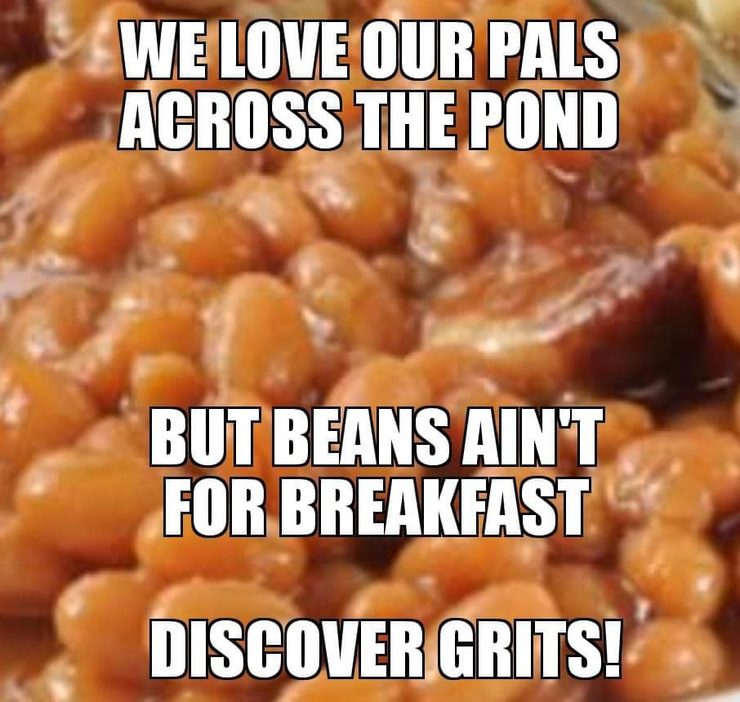 I prefer lunch and dinner items for breakfast, I like things that taste good and most things people eat for breakfast suck

that kind of bean isn't for shit, morning noon, or night. Frijoles con chile ye queso is great for breakfast, grits are great for slopping hogs

Tho I don't have them for breakfast, I'd rather beans than grits! Actually prefer hash browns or Potatoes O'Brien!

A former friend of mine had to go to jail. After he was convicted, they didn't haul him off right away. They gave him an extension. Had to show up one day on time, or he'd go right to prison. Anyways, I suggested he ate a bunch of beans before he had to go. I house sat for him, and was there the night before he had to go. Next morning he ate 2 cans of beans and drank a six pack. From what he described, it backfired very badly. lol

Don't take too much advice from me. lol

@phxbillcee From what I understand, very close to that. lol

Grits?......Blah. Bacon & Eggs and more Bacon is a proper American breakfast. Grits are for the chickens and worse than beans for breakfast.

Actually if you mix grits eggs and bacon together it's scrumptious!! Grits aren't for sweetening...yuk! Was raised with it...mom being from SC. I remember the first time I had malt o meal...nasty!! I thought chocolate!! Hell yeah!! .. Then that first bite...mom it's grits! Gross!

@Captnron59 It must be an acquired taste. I lived in Alabama last year and it's almost assumed out there that if you're having breakfast grits are apart of that.

@Captnron59 grits are the best when properly cooked with salt and pepper.

They're good for your heart.. But not in the morning... I'd be farting all day lol
And yes, girls do fart!