A guy complained in my small town Facebook page because someone called the police on him for walking in town with a large weapon. He was then asked by the officer what was going on and he let him go on his way once he figured out he was hunting. All the replies are furious that he was bothered.
(bow and arrow not gun but still) 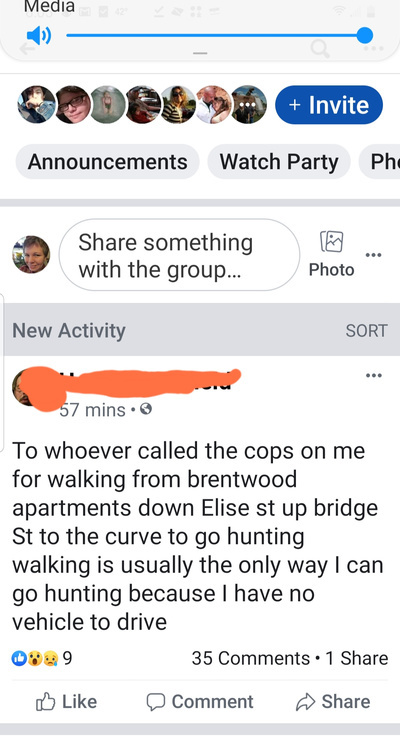 In my small Iowa town people who try and open carry are politely told they aren't welcome in our town by the police. Not sure what he's complaining about, the police doing their job?

No offense, but this has to be the most pathetic thing I have read on this group. This state is an open carry state. I could walk up and down the street with a Browning BMG if I wanted all day long. As long as I am not threatening anyone, can't do shit. But I don't know why anyone would do that. I've gotten pulled over two times with firearms. Police ask if I have one. I say yes, it it over there. They ask me to step outside, run the plates, check for warrants, etc. It's usually something like a broken tail light bulb. After the check they say something like "just get it fixed", and I am on my way. Everbody knows I am armed around here. Police, the mayor, citizens, etc. I once got pulled over by a farmer. He asked if I had a rifle. I said no. He was shocked I didn't. He asked because he said that if I saw a coyote on his property, he wanted me to shoot it.

Some people still hunt for their food. We know what is going into the processing, and it is very cost effective.

I wasnt really commenting on the fa t he isnt allowed to have a weapon. More the fact that he is so very upset about being at all questioned about it. I do find it ironic all the people that shared his outrage are the same ones that think black people complain too much about police harassment when you see stories about people being actually brutalized who are not carrying weapons.

@MsAl I get your point there. Yes, there is an epidemic of police officers shooting unarmed minorities for no reason. This is a huge problem, and is usually "dealt with internally".

If I was in his shoes, I'd be mad too. On a side note, I once had the former Sgt. of a neighboring county come to private property (my dads). A friend was driving on said property, and I was in the back looking for coons. He got stuck in the snow. Called another friend to pull us out. When he got their the SGT was waiting at the end of the drive (like 1/4 mile or so), and he talked to him. He said that there was "machine gun fire". I told my other friend to not let him in. He ignored. I'd like to know when a lever rifle is a "machine gun". He was out of his jurisdiction. Should have talked to the Sheriff about that.

Here's another point, who's going to buy his gear? Another hunter. You haven't stopped anything by telling him to sell his gear and buy a car. Cars cost money, from maintenance, to fuel and insurance. I for support this guy. He didn't buy into the social norm. He's supporting himself. How many of you can say that you can do that without a hefty paycheck?

I don't hunt... he can sell his weapons and get a car.

I'm just annoyed that these are the very same people who fly blue lives matter flags and seem to be OK when black people get shot carrying skittles.

@MsAl Is the Make Up of a thread in the Fabric of ameriKKKa. Us, Them and The Others... NEVER WE. Fucking 2nd Amendment and Freedom to be Assholes because is Stolen Land after All.

Selling his weapons will only give him food for a year. If he's allowed to hunt, he can feed himself for the rest of his life.

@Unclehotrod With his car he can be an Uber driver as many others... is he milking cows too? WHAT MAKES YOU BELIEVE HE HUNTS FOR FOOD? He has no car... was he seen dragging a deer down the streets? Oh the Simplehood of Minds in ameriKKKa.

@GipsyOfNewSpain why else was he going hunting? Wake up, a lot of still hunt for food. A $30 permit is a lit cheaper than paying $3.00 a pound for processed meat

@GipsyOfNewSpain he was on his way, you don't show up in the middle of the woods miraculously, you have to get there somehow. He didn't have a car so he walked. Do you have a problem with someone walking to hunt to feed himself?

@Unclehotrod Yes, I got a problem with all hunters... what ever is their "escuse" to hunt.