The author of this piece, Joel Doerfler, is a Chair in the Department of History at Riverdale Country School in New York.

If there’s a foundational assumption shared by almost all the authors in the collection it’s that the Zionist-Palestinian conflict is altogether exceptional in its complexity and that introducing students to the subject requires extraordinary sensitivity and caution. Rather than argue this questionable thesis, author after author simply takes it as self-evident, presenting their courses as virtuous specimens of balanced and politically neutral pedagogy.
...
An indispensable part of a teacher’s job is certainly to promote critical and independent thinking; to respect complexity and eschew crude moralizing; and to help students understand how historical actors have behaved and have justified their behaviors to themselves and to others ... Is it, in fact, the case that the subject of Palestine-Israel is more “complex” than other historical subjects? How come? Does understanding this subject entail digesting more information than is required by other subjects? Are the issues in dispute more esoteric or obscure? Does an exploration of events in Palestine/Israel over the past 150 years generate more ambiguity or complexity than studying the history of, say, France or Mexico or the U.S. during this period?
...
What they’re actually asserting is not that the history is especially complicated or ambiguous, but, rather, that, in their view, the ethical issues posed by the Zionist project in Palestine are especially knotty. Why? Because most of them understand and frame the conflict as one in which two, equally deserving “peoples,” each possessing a legitimate historical claim to the land and an equivalent right to national self-determination, have been unable (because of a failure of empathy?) to compromise their differences.

Again, such a way of understanding the subject is hardly self-evident. It’s an interpretation, a point of view. It’s neither politically nor ethically neutral, and it’s certainly not axiomatic. It’s a position which presumes that the “dueling Palestinian and Zionist narratives” (how many should count? only two? why not more?) are more-or-less equivalently compelling and more-or-less equivalently righteous. This is the way many liberal Zionists interpret the conflict. It’s not the way I interpret it. Nor, for that matter, is it the way many Jews and most Palestinians interpret it.

Consider this thought experiment: How might the professors who foreground the so-called complexity and dueling narratives of the Zionist-Palestinian conflict go about teaching, say, the history of race in America, or the rise and evolution of the settler-colonial regime in Algeria, or the origins and triumph of Nazism in Germany, or the advent and “meaning” of Trumpism? ... would they be satisfied if their students left their courses confused about “who’s right?” and focused on the “ambiguity inherent” in their various subjects? Doubtful. [bolded text my emphasis]

Now, suppose these scholars believed, as I do, that at the end of the day the Zionist-Palestinian conflict is not so very morally or politically ambiguous? Suppose they concluded – not reflexively or “prejudicially,” but reflectively and honestly, based on historical evidence and analysis, that a great injustice has been, and continues to be, perpetrated on the Palestinians? Suppose they believed that the Zionist and Palestinian “narratives” were not “equivalent?” Would they pat themselves on the back for guiding their students into an epistemological and moral void? Wouldn’t they, on the contrary, strive to have their students come away with an understanding of the injustice?

So true progressives and PEPs, I await your comments. 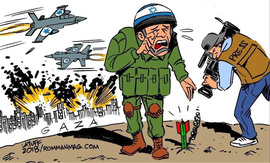 This goes hand in hand with an article I read yesterday I'm getting ready to post. I'll add the link of yours to it also.

The great facade to capitalism, to made it seemingly, apparently, a better choice, is to wipe history clean of any factual evidence relating to a working socialist society, denounce it as a failure while you manipulate that evidence. The USSR and today's Venezuela are prime examples. With the USSR, one wide use of that strategy today is to pronounce the deaths of so many millions due to its then existence. The manipulation of course was leaving out the measures the westernized countries used to combat its existence in many aspects. Ask Venezuela how that works today! While those of the westernized world fail to provide the amount of deaths their capitalist system has cause in many of the same areas of society and the wars it has used to keep it afloat since WWI. Those numbers widely out numbering that of those used towards the times of then USSR.

With Venezuela where Chavez highly eradicated poverty at one time, now growing again under sanctions, theft of their petroleum company, and their gold, poverty has been used as a means to denounce their socialist programs. Even though at one time the poverty there was approximately 70% Chavez reduced it by approximately 50% with a population of approximately 33 million. We have approximately 40 million in the US living in poverty. While all our main stream media manipulate the facts of all other issues of Venezuela to white wash the facts to glorify capitalism.

The same has been done, fact wise, with the Israel - Palestinian history. Again, adding the warring aspect, we receive a white washing of facts and history as land is illegally and immorally taken.