I don’t know how historically legit this message is but it sounds cool ? 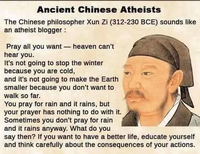 he was way ahead of his time.

Well, Confucians as well as Daoists were atheists, but they did believe in an Unseen Cosmic Order virtuous people should themselves align with. And when they talked about "education" they had nothing in mind that we today would call "science"

He was a Confucian, with a rather dark bent. He was pessimistic about human nature.

It looks like this quote is legit, or at least widely attributed to him, but "heaven" in ancient Chinese thought is not what most Westerners tend to think of it as. It's "that which makes things as they are", so at best, an impersonal Force type of thing.

Even adjusting for that, though, it does sound very secular humanist / atheistic, I agree.

How does an Atheist refer to BCE ?

@Graham88 thanks, good job im not an Aztec, or we would all have died in 2012, but perhaps they got their calendar wrong ?

Cool quote, if authentic. It sounds suspiciously modern, however.

I'll bet they loved him!

Right on. Historically accurate, or not, these are true words.

You can include a link to this post in your posts and comments by including the text q:145544
Agnostic does not evaluate or guarantee the accuracy of any content. Read full disclaimer.