Okay, I don't have kids of my own. This is not news to anyone. I have to ask the parents here what the deal is with bribing your kids to eat certain things? I'm seeing a commercial on tv regarding bribing your kid with french fries to get them to eat their dinner. I know it's just a commercial to sell a product, but I'm also seeing this occur in real life.

Why are so many parents allowing their children to dictate what they will and will not eat? Why are they allowing them to pitch their little tantrums? Why are they accommodating their kids' bad behavior by either bribing them with treats, or just letting them eat something else?
I don't get it, and it's not teaching them anything good.
They're learning that if they pitch a big enough fit, people will do what you want just to shut you up. The real world doesn't work that way, and these kids are in for very rude awakenings.

I wasn't allowed to be a picky eater. Right, wrong, or indifferent, my mother wasn't having it. I ate what she put in front of me, and it didn't matter whether I liked it or not. If I refused to eat it at dinner, I went to bed hungry, and got served the leftovers for breakfast. I learned quickly, to I ate what I was served, and there was to be no discussion at all. I wasn't living in a democracy. It was a dictatorship and my mother's word was law.

Why are some parents allowing this behavior in their children?

I was not allowed to leave the table until my plate was clean. It taught me to hate fruit and some veggies. It has hurt my long term health. And otherwise, my parents are the best on the planet. So I did it differently. Kid had to try a bite before saying ick. Kid had to try it every time we ate the ick food. It takes a while for a palette to form. She either ate what was served or nothing. But she didnt have to finish it unless she served herself-then she had to eat all of what she took. She is a semi picky eater at 14, but she will eat from all food groups, so now it is a matter of expanding her pallette. I think she'll get there. Tantrums were treated as tantrums, not as food related. Tantrums were removed from wherever we were and a time out given. In a restaurant, we went to car. 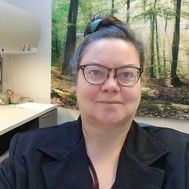 I would like the answer to that. Also what makes my grand kids think they are allowed to jump on my couch?

My kids ate what they were served or went hungry.

Thank you for responding. That's exactly how I was raised.

Think many try to be friends rather than parents to their kids. I hated disciplining my kids, thought they would hate me. But I found the opposite as they responded well to parental direction and discipline. Think today with the PC brigade, no losers all can achieve etc that parenting is much more difficult.

Thank you for responding. I agree with much of what you said.

When my kids mom left us, my daughter was five and my special needs son was almost four. I found out that day that she'd only been bottle feeding him while I was at work (so the only practice he'd had with solid food was when I was at home). I remember, as the kids and I drove home across the country, telling my daughter that 'money was going to be limited for a while, so she'd just need to eat whatever I could get for us'. I also remember stopping at a McDonald's on that trip, and getting mcnuggets for my son; I'd bite tiny pieces off, and gently feed them to him, trying to mimic the chewing so he could copy what I was doing. It didn't take him too many days to get the hang of it, and within a year, I had him eating the same things B and I were having.

My daughter never fussed about what was on her plate; even to this day, while she has developed preferences, she will eat what I fix. And my son will eat everything (your food as well if it gets too close to him).

I don't know if I've just been lucky, or if I had a hand in this because of the way I handled it so early on. But for almost fifteen years now, as we've been on our own, I've never had to deal with picky eating.

That's fantastic. Thank you for responding.

If you can bribe a kid to do that you have mastered mind control. You`de better turn back from the dark side of the force.

My niece and nephew were both incredibly picky eaters. My sister never forced them to eat something they didn't like - she didn't indulge with bad foods, just gave them things they liked, occasionally asked them if they wanted to try something new but never pushed it, and supplemented their diet with a multivitamin. Eventually they grew out of it and tried new things on their own and now eat just fine. Most kids do.

Thank you for responding.

Ditto. Think that had anything to do with why we did not have kids?

My parents made me eat what they served, and it didn't do anything for my siblings and me except teach us to hide the food and lie to them.

I never forced my kids to eat food they didn't like. The rule was they had to taste the food before they decided they didn't like it. I think children should be treated like human beings, encouraged to try new things, but not punished for individual preferences.

I was a picky eater as a child, and so were my children that didn't last into adulthood, and it certainly doesn't make them better or worse people than anyone else. I see parents who enforce arbitrary and senseless rules as simpletons on a power trip.

Yes, kids have to adjust to the real world when they grow up, but that doesn't mean they should have that concept beaten into them before they understand it. The food issue is a really dumb one to stand on anyway because, once they become adults it's one of the few areas they can completely control.

I'm not suggesting you cook entirely different meals for an obstinate child, but forcing them to eat a meal they don't want only aggravates both of you. Give them the "it's this or nothing ultimatum" and let them choose.

Thank you for responding.

I'm Leary of FORCING kids to eat anything.Their senses are sharper than ours and they detect stuff we don't notice. This is an evolutanry adaptation to keep them from poisoning themselves from what I've read.I also think kids have rights and I wouldn't make an adult eat something they don't like so why would I make a child do so? Personally I made a point of introducing my kids to all sorts of food early so they would develope a decent palette.
Do they still prefer junk food? Yeah but they don't avoid fruits and veggies altogether so I figure it worked out ok.

Thanks for responding. You raise some very salient points.

You can include a link to this post in your posts and comments by including the text q:181760
Agnostic does not evaluate or guarantee the accuracy of any content. Read full disclaimer.