Why I am liberal 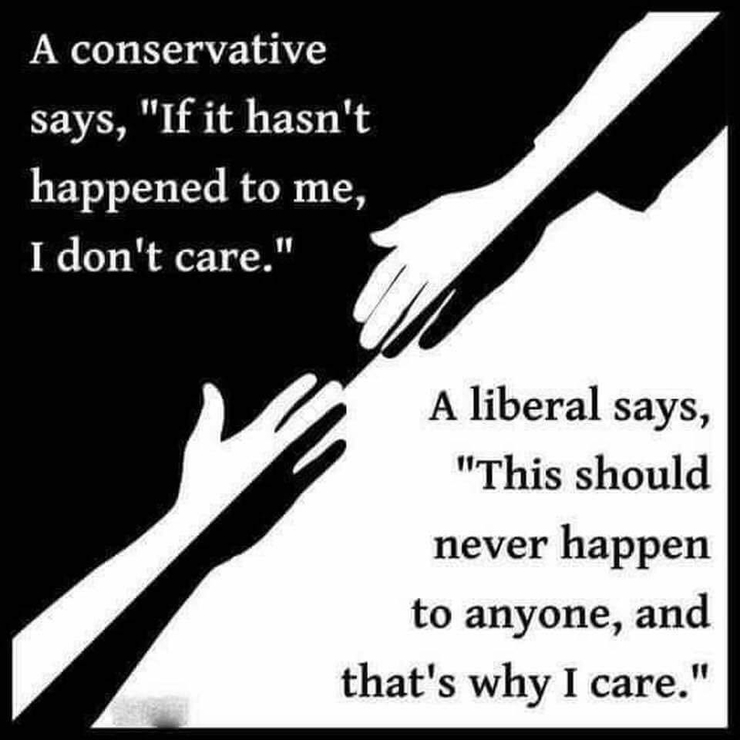 I am a liberal

AronRa has some good bits about what "liberal" means:

I don't know that caring only about what happens to you personally is a core tenet of conservatism. I've known liberals who think that way. Why do you think that liberals are so hard to turn out to vote?

Conservatism as I once understood it was supposed to be opposed to change for the sake of change, opposed to fixing things that aren't broken, in favor of measured and thoughtful change. It's only in recent years that it's somehow devolved into opposing any change, ever, and even regressing to some imagined good old days. And the notion that the unfortunate are 100% at fault for their misfortune strikes me as a side issue that's no more valid than liberal fever dreams that no one will ever misuse public funds. I think that just reflects the current polarization.

I am acquainted with conservatives who are generously giving, empathetic people. I know one personally who generously devotes himself to mentoring mentally challenged children, yet he's a Trump supporter. I saw one on TV recently who was moved to tears about his work to build a school that serves mostly Hispanic youth in Texas, that charges whatever parents can afford, and yet he supports the border wall. You'd probably agree with me that these people are schizophrenic in what they clearly care about and the political positions and politicians they enthusiastically support. But they are not evil, either.

Locally the campaign manager for a progressive Democratic candidate wrote of how some rednecks helped pull a friend's car out of a snowdrift, and how this helped her see the need to humanize her opponents and reach out to them in far more effective ways.

I grant you that the meme is accurate in a way and it's tempting to endorse but I don't think it's the whole story or a fair characterization of conservatives as a block.

A conservative is a liberal selfishly afraid of change.
A liberal is a conservative that gets bored easy.
Someone who cares about others is a slightly confused empath.

Me, too. I think that it was Joe Biden who said that Republicans lack empathy.

That isn't all they lack, but that is good for a start.

You can include a link to this post in your posts and comments by including the text q:209401
Agnostic does not evaluate or guarantee the accuracy of any content. Read full disclaimer.