'An Insult to the American People': Outrage After Pentagon Fails First-Ever Audit!

Decrying "unchecked waste, fraud, and abuse," Rep. Barbara Lee said, "This is exactly why we must #AuditThePentagon."

"The unchecked waste, fraud, and abuse at the Pentagon is an insult to the American people."
—Rep. Barbara Lee
"We failed the audit, but we never expected to pass it," Shanahan told reporters at a press briefing. While expressing irritation with the poor money management, he added, "it was an audit on a $2.7 trillion dollar organization, so the fact that we did the audit is substantial."

Although a 1990 federal law requires all U.S. government agencies to conduct annual financial audits, the Pentagon put it off until launching this one last December. Critics of the United States' astronomical military spending said the findings were precisely why lawmakers and the public have demanded Defense Department audits for decades.

"This is exactly why we must AuditThePentagon," tweeted Rep. Barbara Lee (D-Calif.). "The unchecked waste, fraud, and abuse at the Pentagon is an insult to the American people."

"The simple truth is that the Pentagon is an atrocious steward of the hundreds of billions of dollars taxpayers give them every year," Win Without War director Stephen Miles told Common Dreams.

Even while members of Congress have called for audits, they've passed bipartisan bills doling out billions of taxpayer dollars to the department. The John S. McCain National Defense Authorization Act (NDAA) for Fiscal Year 2019, passed by lawmakers earlier this year allocated $717 billion to military spending, the bulk of which goes to the Pentagon.

Millions of dollars have gone into the audit process, and millions more will be spent to fix the issues it identified, according to Defense Department Comptroller David Norquist. He told lawmakers earlier this year that it cost $367 million to conduct the review, and it will take another $551 million to resolve the problems the some 1,200 auditors found.

The audit findings come as a new report from the Costs of War Project at Brown University's Watson Institute estimated that the since 2001, the so-called War on Terror has cost the United States a "staggering" $5.9 trillion."

In reality it is closer to $10 Trillion!
We really do not know how much all out waste, fraud, and corporate welfare has actually been abused! 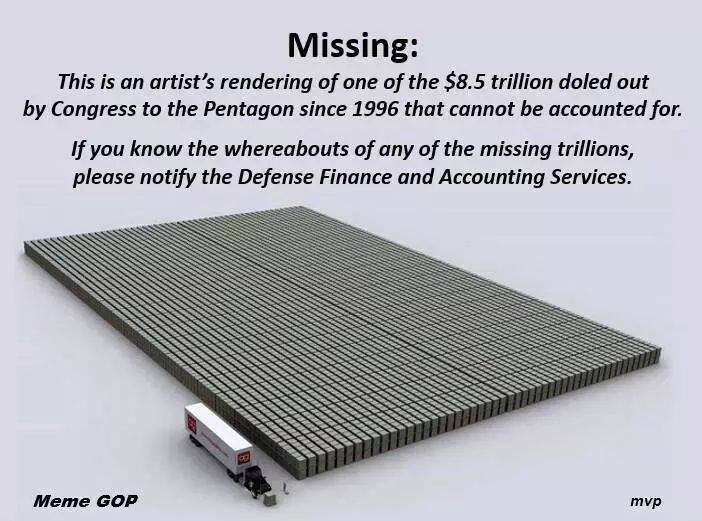 A picture is worth 8.5 trillion dollars....quite alarming when you put it in this scale

The Pentagon has been having difficulties keeping track of money for most of my life, so this isn't really new. However the size is quite alarming!

You can include a link to this post in your posts and comments by including the text q:225216
Agnostic does not evaluate or guarantee the accuracy of any content. Read full disclaimer.