So saw this on Facebook and the believers are PISSED. As non-believers do you agree with her that if you are hearing voices you are mentally ill? I agree with her and I stated it to my relative who shared it and in the comment feed under the FOX News who shared it. Now we wait for the hellfire so to speak. LMAO 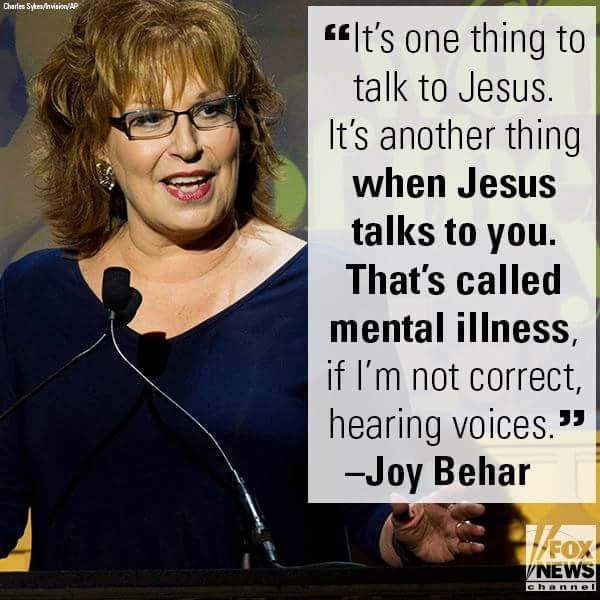 If you want to call delusion a mental illness...lmfao

When people try to convert me, I ask them if they've felt the might surge of Zeus' lightning, the Eagle from on high whom watches over us from Mt. Olympus.
They think it's silly. I tell them it's even sillier that they don't even have a statue of what their God looks like.

They have a statue of what Jesus looks like

@AccursedHalo But Jesus isn't Yahweh. Also, the depiction most widely used is of some Italian model during the middle-ages, not a Jew from Israel in the first century. He may as well be dressed like someone from the 80's.

Somebody asked me if I had accepted Jesus Christ as my Lord and Savior? So I said, I talked to Jesus yesterday and he told me to tell you, it's none of ya damn bizzyness!

If I really believed a person was mentally ill, deliberately trying to anger them would seem unkind at best, and maybe a sign of mental illness on my part. If I really didn’t think the person was actually mentally ill but called them that because they held beliefs different from my own, I would think that my debating skills were lacking.

There is mounting scientific evidence suggesting that “hearing voices” is an evolutionary adaptation; not the voice of an actual god, but also not a sign of mental illness. At any rate, it, in itself, seems harmless enough. I worry more about people who think it’s admirable to generate war for profit.

Perpetuating memes that demean a class of fellow humans for their beliefs seems indistinguishable from what we’re often complaining about ourselves; being treated unfairly because of our worldview.

here in UK we have Hearing Voices Networks where people get together who are voice hearers - not everyone feels they have anything to heal and don't get destructive voices but those who do can get help for what to do, I have D.I.D and occasionally hear voices , but my alters are pretty quiet these days I imagine because I am less tuned in - being a lot older.
[hearing-voices.org]
You all sound as if you think all voices are religious I know no-one who gets messages from god some of the messages are helpful like your shoelaces are untied.

I agree that LITERALLY hearing voices reflects a form of mental illness. The level at which most believers claim to "talk with" god is no different than a child with their imaginary friend, it is just a personal / group fantasy role playing thing.

If I ignore that there are proper definitions of what "mentally-ill" means, personally, I think it is equally crazy and bizarre for an adult person to talk to non-existing mythical beings and hearing them talk.

What a can of worms! I know fundies believe jehebus talks to them and they think everyone who doesn't just "ain't right with gawd". We have Pence, our lusterless VP, and a ton of congressmen who believe that crap.

To them you're only crazy if you're hearing voices other than jehebus...or you're possessed by demons.

BuT tHe hOLy sPirIt sPeAKs tO Me

You can include a link to this post in your posts and comments by including the text q:24986
Agnostic does not evaluate or guarantee the accuracy of any content. Read full disclaimer.