The US's "dental refugees" flock to Mexico in the thousands every day, seeking affordable care.

Millions of Americans Flood Into Mexico for Health Care — the Human Caravan You Have not Heard About!

"The Trump administration is trying to convey panic that there is an immediate crisis on the southern border, pointing to caravans of desperate people who have traveled thousands of miles.

It is true that Latin and Central Americans are coming to the US fleeing violence and poverty, much of it caused by destructive US trade policy over the course of decades. But there’s another massive “border crossing” phenomenon afoot — and Trump has not said a word about it. We’re talking about thousands of US citizens crossing the border each day in search of affordable health care.

At just one checkpoint in Yuma, Arizona, up to 6,000 Americans cross the border every day and enter the bustling Mexican town of Los Algodones, seeking heath care.

Unlike the Trump administration that seeks to build a wall between the countries, Los Algodones welcomes Americans seeking dental care with open arms.

Los Algodones has to be seen to believed. There are more dentists per capita than anywhere else in the world. It seems like every square foot of public space wall is covered with advertisements promising quality and affordable dental care, vision care and prescription drugs. The community’s economy is built to serve the flood of “dental refugees” — mostly senior citizens from the US and Canada seeking major dental care they cannot afford in their own countries, even with insurance.

The statistics are jarring. Approximately 74 million people in the US have no dental insurance, according to the National Association of Dental Plans. To put those numbers into perspective, that’s nearly a quarter of the population, or roughly twice the number that lacks health insurance overall.

Most dental plans don’t cover much at all beyond regular check-ups, cleaning, X-rays and fillings. Beyond that, patients are expected to fork over much of the cost of large but common procedures like crowns, root canals and implants. Dental plans also generally pay a maximum of $1,500 annually, a number that’s hardly changed in 50 years. And $1,500 doesn’t go far when you consider the cost of major dental work. The cost of a single crown can be as much as $2,000 and the cost of an implant can run $5,000 a tooth. It’s not uncommon for seniors to need a set of four implants and several crowns, so you can see the costs can quickly get prohibitive. 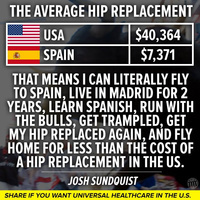 I had spinal fusion surgery a little over a year ago and the bill was ~70K for 4 days in the hospital which included the surgery, supplies, meals, care of nursing and physical therapy. Fortunately, I had and now have different and better insurance and all i paid out of pocket was $100. I am extremely fortunate in this regard. The surgery was life changing!! I've spent more on a week's worth of groceries for one person than this procedure cost me. My annual deductible was $1,600 which i did pay over the year for other incidentals. If you don't have health insurance you can be very desperate for things like insulin which is a health maintenance drug and the cost of that has skyrocketed. Between 2002-2013 the cost of insulin tripled and I am certain it's even more expensive now because that is a dated statistic.

I have a friend in Iowa who speaks fluent Spanish. He's going to Mexico for two weeks for a dental procedure and vacation. The who trip will be cheaper than getting his dental work done at home.

You can include a link to this post in your posts and comments by including the text q:273747
Agnostic does not evaluate or guarantee the accuracy of any content. Read full disclaimer.