Found these inches from each other. Black man selling "drugs" scary dangerous and deserves to rot in prison. White lady "investing" in pot= smart financial moves. Our entire popular culture is full of this shit.
Seems I have to point this out. These stories are written in specific language and slanted a certain way to elicit responses in people reading them. Exactly how effective that slant is on the responders here is pretty eye opening. Come on people. I thought we prided ourselves on being critical thinkers on this site. 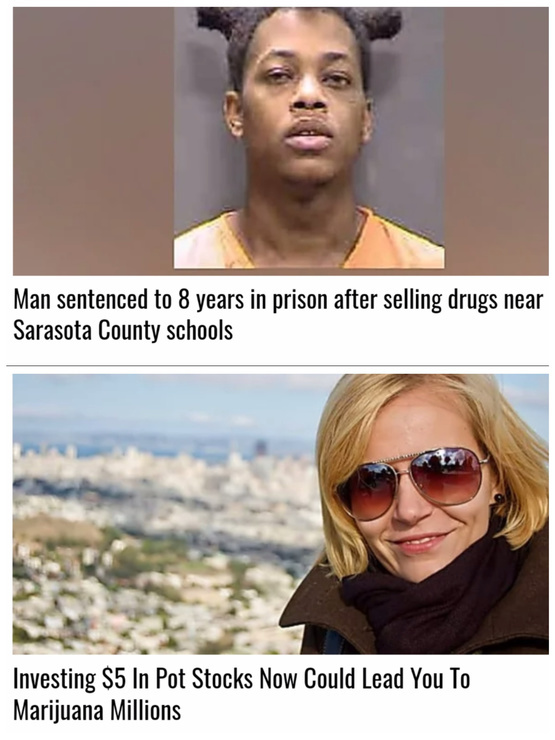 Reminds me of the stories during hurricane Katrina. A newspaper photo of black people, in waist deep water, were 'looting' the grocery store. In a different paper the white people were 'salvaging' from a store. I don't think I'll ever forget that.

Looked up the story by the headline. He was allegedly selling fentanyl, which is basically synthetic morphine on crack for the unfamiliar.

I get and agree with the general statement behind this post. Convictions and drug-related arrests often favor black men.

In this particular instance, maybe it's just not the best example. Weed can't harm you, and it's becoming more and more socially acceptable as well as legal in many places. Fentanyl is an epidemic, and if a school-aged child somehow managed to get a hold of any, that child could easily die.

Please don't take this for criticism of the OP, I entirely agree with the sentiment, just not the example. 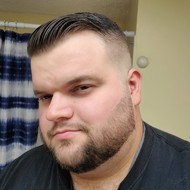 Fair enough. I should have looked deeper. I stand by my statement about the tone of these two stories though.

@OpposingOpposum I'm with you there 100 percent. I work in (small town) media and I see these kind of headlines alllllll the time.

Mire than likely he wasn't selling weed. Not to mention he was selling around a school which is just stupid and if you do that you deserve what you get. All this feel sorry for the black man shit is getting old. Are black people treated unfairly? Absolutely but guess what so are most races. Are white people ignorant and intolerant? Definitely but again most races are. Everyone is so caught up in the racial bullshit they fail to realize it's not a racial issue it's a moral and human issue. That being said what is a racial thing is that americans and via "white" americans are the main consumermers of drugs in the world so simple lay off the drugs and others won't have a reason to sell or produce the drugs.

" nearby" can be a two mile radius. Bit of a stretch.

ALL drugs should be legal.
No distinctions.
The current "system" is rigged and racist.
Legalize everything.

Drugs should all be legal and taxed money gained to treat addition.

(kidding, I knew what you meant and I agree)

Many Florida laws are unreasonable. However did you fail to realize that investing in pot where States have legalized it, is entirely different than selling pot in a State where it is still illegal? It is not a matter of black and white (no pun intended) rather a matter of Florida being behind the time as respect pot. By the way, your post said the guy was selling "drugs" was it pot? Do you know? Last, even in States where pot has been legalized it is still illegal to sell it to kids

A) he wasn't selling it to kids, he was selling in the vicinity of a school B) profiting off drugs is profiting off drugs. The fact that one method is socially sanctioned and the other is not is a BIG part of systemic racism. C) I don't know which drugs he was selling but it was likely pot around here.
Your reaction is typical " this person was following the rules" (p.s. selling and investing in pot is still illegal on the federal level. So wherever she is, she is breaking the law just as much as the black man. She's just a nonthreatening white lady so she gets a pass while he goes to prison.) This (poor black) person was not"

@OpposingOpposum Many States have laws making the sale of drugs within X feet of a school a more serious crime than if sold elsewhere. Perhaps that applies. NO, "profiting off drugs" is NOT profitting off drugs. It can be done legally or illegally. Too bad you can't see the obvious difference. You interjection of race is absurd. If a white guy was caught in the same place selling drugs, you have NO clue what the sentence would have been.

Comparing cannabis to other hard drugs is a mistake, cannabis is even easier on the body than alcohol, and pot is now legal in many states. Hard drugs can kill. Dealers targeting youths with such drugs ought to be dealt with harshly.

That said our drug laws are all fucked up with 70,000 people dead from overdoses in 2017 and I think this number is higher now.

If society wants to curb this disease then addicts need to be treated as sick and not criminals. They ought to be treated by a qualified physician who has sole discretion regarding over treatments.

I don't know about that. While pot doesn't kill people, I do not think it is as universally beneficial as many enthusiasts would have us believe. Personally I think consenting adults should be allowed to take whatever drugs they want but I'm not a fan of any of them tbh.

Depends on the drugs.

I'm not cool with much of anything but Pot.

Pot doesn't make folks go off the deep end - a lot of other drugs do. That Weed was made criminal to make poor minority people go to prison? That's just ridiculous shit and that needs to change.

Just have to wonder what kind of drugs he was selling

Which is exactly WHY the headline was left at "drugs" instead of specifically saying marijuana. Shit like this is DESIGNED to make white people scared of black people so that they support depriving them of their lives and liberty.

@OpposingOpposum Oh, I've no doubt of that!

You can include a link to this post in your posts and comments by including the text q:304268
Agnostic does not evaluate or guarantee the accuracy of any content. Read full disclaimer.